Drought in the Western United States

The U.S. Drought Monitor (USDM) categorizes drought in a region according to soil moisture, streamflow, and precipitation levels. Regional designations can vary and are primarily based on historical weather patterns. Drought can adversely affect many aspects of the U.S. agricultural sector. In regions that rely on rainfall for agricultural production, drought can diminish crop and livestock outputs and may severely affect farm profitability. Drought also reduces the quantity of snowpack and streamflow available for diversions to irrigated agricultural land. These impacts can reverberate throughout the local, regional, and national economies. Locally, droughts can reduce farm income and negatively impact food processing and agricultural service sectors, while food prices may increase at the regional and the national levels.

As of July 11, 2022, drought conditions were most severe in the States of California, Texas, Oregon, Nevada, Utah, and New Mexico. According to USDM, on July 11, 2022, more than 32 percent of land in western states was classified as experiencing extreme or exceptional drought. Data reported by USDM demonstrate the incidence of drought in the western United States during the summer of 2021 exceeded all past droughts in the region since 2000. Drought conditions in the western United States gradually subsided in the latter months of 2021 and began intensifying again during the first half of 2022. 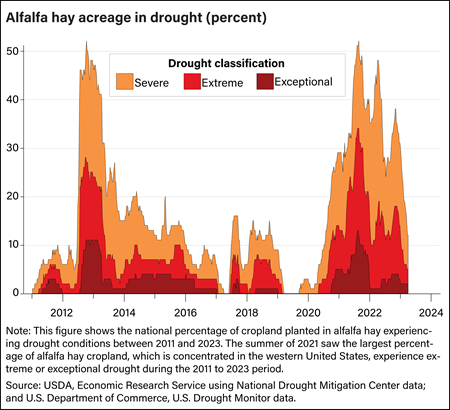 Please visit the National Integrated Drought Information System's Agriculture Sector webpage for a map of the latest U.S. areas experiencing drought and the agricultural activity in those areas.