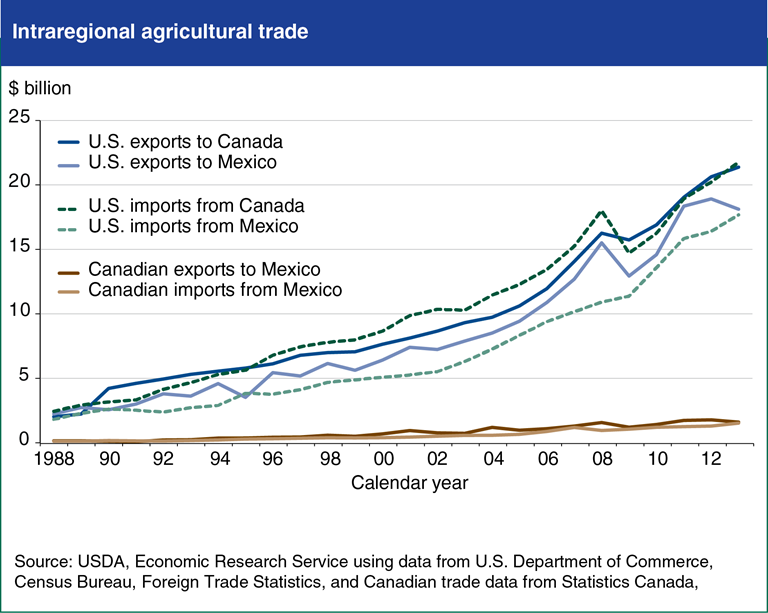 Agricultural trade among the North American Free Trade Agreement’s (NAFTA) member countries has grown since the agreement was implemented. The total value of intraregional agricultural trade (exports and imports) among all three NAFTA countries reached about $82.0 billion in 2013, compared with $16.7 billion in 1993 (the year before NAFTA’s implementation), and $8.8 billion in 1988 (the year before the Canada-U.S. Free Trade Agreement’s (CUSTA) implementation). When the effects of inflation are taken into account, this expansion in intraregional agricultural trade corresponds to an increase of 233 percent between 1993 and 2013, compared to U.S. agricultural trade worldwide, which grew 126 percent over the same period. The vast majority of trade between these 3 nations involves the United States; U.S. agricultural trade with its 2 NAFTA partners alone reached $78.9 billion in 2013, compared with $16 billion in 1993. The expansion of U.S. trade under NAFTA reflects similar patterns of growth between exports and imports, highlighting the high degree of market integration across these nations. This chart is from the report, NAFTA at 20: North America’s Free Trade Area and its Impact on Agriculture.