U.S. agricultural production relies heavily on the Nation’s land, water, and other natural resources, and has a direct impact on the quality of the Nation’s natural environment. Over the years, significant improvement in the sector’s productive use of resources has reduced the amount of land and water needed per unit of output, and concerted public and private efforts have greatly improved the sector’s environmental performance. These charts document several aspects of these trends.

Agricultural production is a major use of land, accounting for over half of the U.S. land base 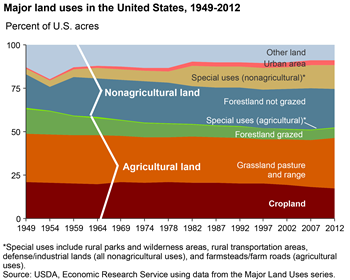