Livestock production is scattered across the country

Livestock production and sales occur in all 50 States. Texas, Iowa, California, Nebraska, and Kansas lead the country in sales value of livestock and their products. The cattle sector is the dominant source of value in Texas, Kansas, and Nebraska. Milk from cows accounts for about 57 percent of livestock-sale value in California. Both the hog and cattle sectors are large sources of sales value in Iowa. North Carolina is the leading producing State of poultry and eggs, followed by Georgia. 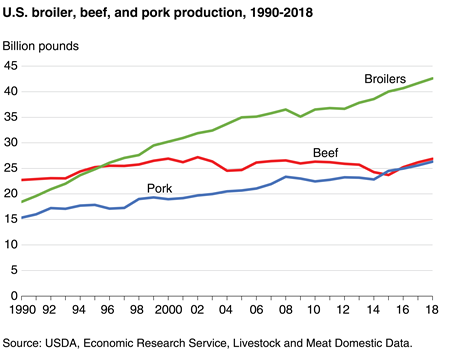 With only a few exceptions, production of broilers (the most efficient converter of feed to meat) has outpaced growth in beef and pork production since 1990, and poultry meat has been the major meat produced and consumed in the United States since the mid-1990s. Total domestic per capita beef, pork, and poultry disappearance (a proxy for use) is beginning to increase again after several years of decline that reflected higher feed costs, higher retail prices, and effects of the 2007-09 economic recession. Exports of meats and products also continue to be an important source of demand. 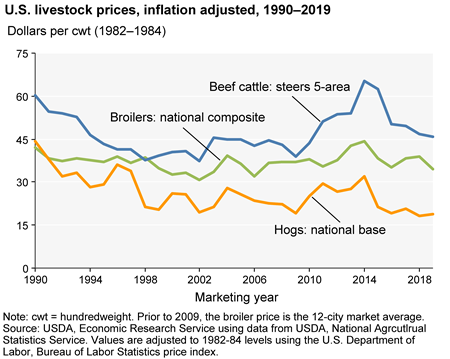