The number of people living in nonmetro counties increased by 33,000 between July 2016 and July 2017, ending 6 years of modest population losses. The gap between nonmetro and metro growth rates narrowed slightly in recent years, but remains significant. Metro areas grew by 0.82 percent in 2016-17, compared with 0.07 percent growth in nonmetro areas. The post-recession recovery in population growth for nonmetro America during this decade has been much more gradual compared with previous post-recession periods.

In addition to this topic page, ERS provides annual statistics in its County-level Datasets: Population, and State-level (rural/urban) summaries in its State Fact Sheets.

A summary of rural population conditions and trends (among other rural issues) is found in the Rural America at a Glance series, updated in the fall of each year. See the latest in the series:

ERS tracks demographic change in nonmetro areas and conducts research to help explain the relationship between population change and the socioeconomic well-being of rural and small-town residents. A summary of the latest conditions and trends includes the following: 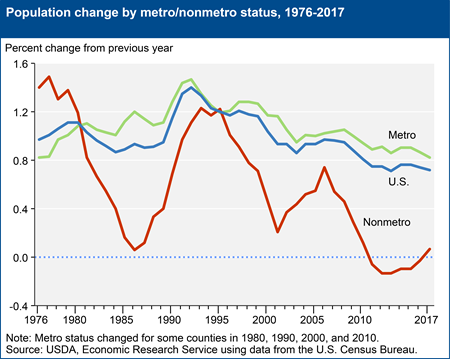 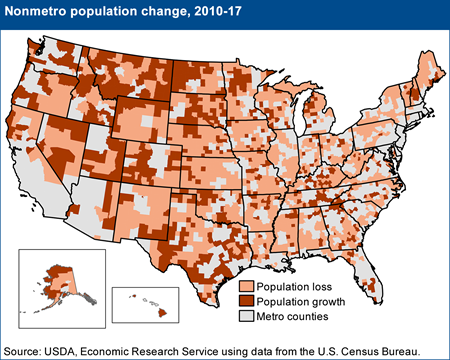