Consumer demand for organically produced goods has shown strong growth since the 1990s, providing market incentives for U.S. farmers across a broad range of products.

USDA does not have official statistics on U.S. organic retail sales, but information is available from industry sources. U.S. sales of organic food products were an estimated $21.6 billion in 2010 and reached $51.6 billion in 2020, according to the Nutrition Business Journal (NBJ, 2021).

Sales of fresh fruits and vegetables have been the top category of organically grown food since the organic food industry started retailing products. Retail sales of fresh fruits and vegetables were an estimated $20 billion in 2020 and have steadily trended upward for the past two decades (NBJ, 2021). According to the Nutrition Business Journal, produce accounted for 39 percent of U.S. organic food sales in 2020—followed by dairy and eggs (13 percent), packaged/prepared foods (12 percent), beverages (12 percent), bread/grains (10 percent), snack foods (6 percent), condiments (5 percent), and meat/fish/poultry (4 percent). 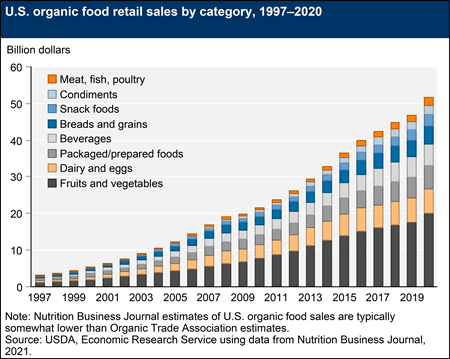 According to USDA, National Agricultural Statistics Service (NASS) surveys, organic milk production has increased by 27 percent from 2016 to 2019 (to 5.1 billion pounds), but the market share of organic fluid milk has been declining since 2016 (Information Research, Inc., 2021). Organic soymilk is the most sold organic plant-based milk, followed by organic almond milk (Information Research, Inc., 2021). While almond milk rose in popularity in the early 2010s, organic almond milk entered the market in 2014, as almond producers transitioned into an organic production system.

According to the Organic Trade Association, 88 percent of organic sales occur through conventional and natural food supermarkets and chains. The remainder of sales occur through farmers markets, Community Supported Agriculture (CSAs), other direct-to-consumer sales, and internet sales. The share of organic food sold to consumers via the internet has grown from 2 percent in 2012 to 6 percent in 2020 (Organic Trade Association, 2021).

Compared to conventional growers, organic growers are more likely to sell their products through direct markets—such as farmers markets, CSAs, or mail orders. According to the 2017 U.S. Census of Agriculture, direct-to-consumers sales made up less than 1 percent of the total value of food sold. In contrast, more than 6 percent of the value of organic food sales came from direct-to-consumer systems, with 18 percent of certified organic farms selling at least a portion of their products directly to consumers.

Over the last decade, USDA's Agricultural Marketing Service (AMS) has expanded wholesale and shipping point price reporting for organic fruits and vegetables and added new price reports on organic grains, poultry and eggs, and sales volume for milk. Prices for organic products continue to be higher than for their conventional counterparts.

At the retail level, organic products typically receive a price premium over non-organic products. An ERS study analyzed organic retail price premiums for 18 products from 2004 to 2010 and found the premium to be more than 20 percent for 17 products. The study found that premiums fluctuated year to year without a clear trend—except for spinach, canned beans, and coffee—which showed a steady decrease in the premium, and yogurt, which showed a steady increase from 2004 to 2010. Sales for organic products with lower premiums (such as spinach, granola, and carrots) saw larger increases in market share. See the ERS report, Changes in Retail Organic Price Premiums from 2004 to 2010, for more information.

Production Costs are Higher for Organic Relative to Conventional Products

On average, U.S. organic farms have higher production costs than conventional farms, although organic price premiums over conventional products at the farm and retail level may give farmers the opportunity to recover the elevated cost of production of farming organically.

Through analysis of USDA’s Agricultural Resource Management Survey (ARMS) data, ERS compared the costs of production and returns for organic and conventional production in major crop/livestock sectors, and analyzed other economic characteristics of organic agriculture.

See these ERS reports for more information on organic versus conventional production costs and returns:

There are numerous studies on the buying habits and demographics of consumers of organic foods. Results have varied depending on the type of survey, sample size, and geographic coverage. However, studies show that organic food consumers include all types of consumer demographics. A study from the Organic Trade Association (using data from a large, nationally representative sample of U.S. households) found that more than 80 percent of U.S. households purchased organic food in 2016. A consistent finding across studies is that millennials (born between 1981 and 1986/87) are more likely to purchase organic food than older generations.

Consumers may prefer organically produced food because of their views regarding health, the environment, and animal welfare. Organic consumers show a willingness to pay the higher prices established in the marketplace.

Organic Trade Is an Important Outlet for Organic Agriculture

Trade plays an important role in meeting consumer demands for organic products, domestically and abroad. The U.S. Department of Commerce began adding codes for selected organic products to the U.S. trade code system in 2011, and in 2022, actively tracked 37 organic export and 57 organic import categories. The value of organic imports has increased—in part because more products are being tracked—but also because of increases in some of the highest-value imports, such as fresh cultivated blueberries and squash. 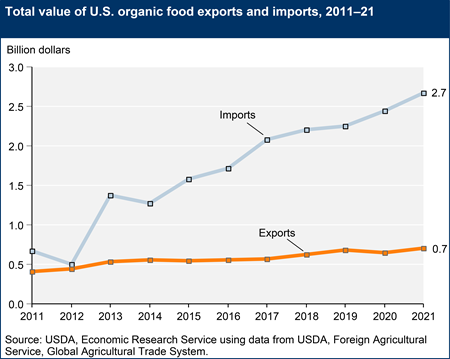 Importers of organic products must either be USDA certified or belong to a trading partner with an organic recognition agreement with the United States, which allows foreign Governments to accredit certifying agents to USDA organic standards. The United States has bilateral equivalency arrangements with Canada, the European Union, Japan, Korea, Switzerland, Taiwan, and the United Kingdom. In 2021, USDA announced the termination of its recognition agreement with India, determining India’s organic control system insufficient to protect the integrity of the USDA organic seal.

For some organic agricultural categories, demand in the United States has increased at a faster pace than the domestic supply. For example, the United States relies on imports of organic grains and oilseed crops to meet demand from the organic dairy and livestock sectors. Approximately 75 percent of the supply of organic soybeans were imported in 2016 and 64 percent in 2019. See Feed Outlook: August 2021 for more information. 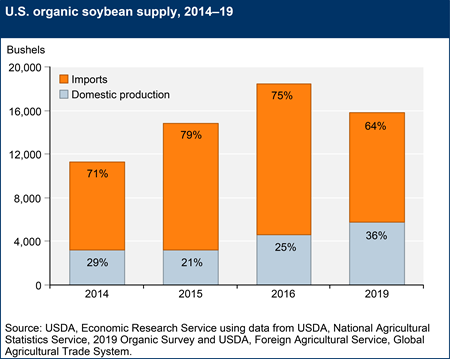