It is widely agreed that increased productivity is the main contributor to economic growth in U.S. agriculture. The level of U.S. farm output was about 2.7 times its 1948 level in 2019, growing at an average annual rate of 1.42 percent over the period. Aggregate input use increased at a modest 0.06 percent annually in the same period, so the growth in farm sector output was primarily attributed to productivity growth, which increased at an average 1.36 percent per year. But what exactly is productivity?

Single-factor measures of productivity, such as corn production per acre (yield or land productivity) or per hour of labor (labor productivity), have been used for many years because the underlying data are often easily available. While useful, such measures can also mislead. For example, yields could increase simply because farmers are adding more of other inputs, such as agricultural chemicals, labor, or machinery, to their land base. USDA produces measures of total factor productivity (TFP), taking account of the use of all inputs to the production process.

Specifically, annual TFP growth is the difference between growth of aggregate output and growth of all inputs used. TFP, therefore, measures changes in the efficiency with which inputs are transformed into outputs. Input measures are adjusted for changes in their quality, such as improvements in the efficacy of chemicals, or changes in the demographics of the farm workforce. As a result, agricultural productivity is driven by innovations in onfarm tasks, changes in the organization and structure of the farm sector, and research aimed at improvements in farm production. In the short-term, measured agricultural productivity can also be affected by random events like weather. 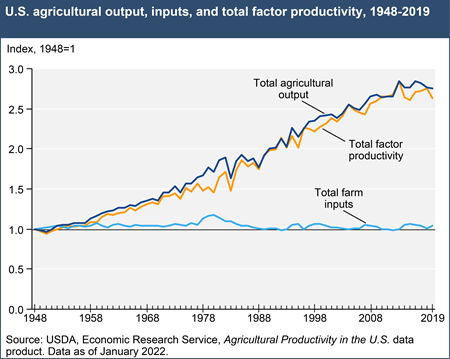