Rural areas are defined in a number of ways according to the economic or social outcome of interest. Rural economic and demographic changes are closely linked; both are essential to understanding whether diverse rural areas are prospering or in distress, and how underlying factors such as education affect the well-being of rural communities. Recent trends point to relatively slow employment and population growth in rural areas, accompanied by increases in poverty. These trends vary widely across rural America. 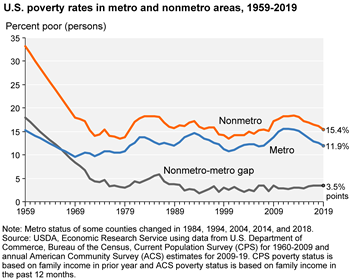 Nonmetro areas have had a higher rate of poverty than metro areas since the 1960s (when poverty rates were first officially recorded). Over time, however, the difference between nonmetro and metro poverty rates has generally narrowed, falling from an average difference of 4.5 percentage points in the 1980s to an average gap of about 3 percentage points in 2010-18. In 2019, the nonmetro poverty rate was 15.4 percent, while the metro rate was 11.9 percent.