Rural areas are defined in a number of ways according to the economic or social outcome of interest. Rural economic and demographic changes are closely linked; both are essential to understanding whether diverse rural areas are prospering or in distress, and how underlying factors such as education affect the well-being of rural communities. Recent trends point to relatively slow employment and population growth in rural areas, accompanied by increases in poverty. These trends vary widely across rural America.

Defining rural areas: "Nonmetro" is based on counties 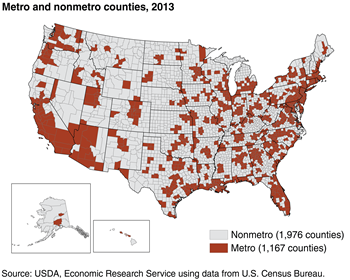 The Economic Research Service, and others who analyze conditions in "rural" America, most often study conditions in nonmetropolitan (nonmetro) areas, which are defined on the basis of counties. Nonmetro counties include some combination of open countryside, rural towns (places with fewer than 2,500 people), and urban areas (with populations ranging from 2,500 to 49,999) that are not part of larger labor market areas (metropolitan areas). The 1,976 counties currently classified as nonmetro include 15 percent of the U.S. population (just over 46 million people) and 72 percent of the Nation's land area. 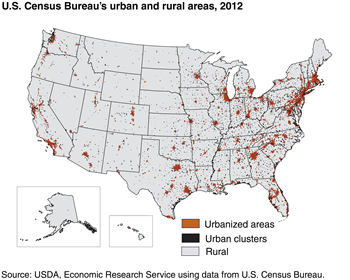 One definition of rural, based on relatively small geographic building blocks, is provided by the U.S. Census Bureau in its urban-rural classification system. In this delineation, rural areas comprise open country and settlements with fewer than 2,500 residents. Urban areas comprise larger places and the densely settled areas around them, but do not necessarily follow municipal boundaries. Urban areas are essentially densely settled territory as it might appear from the air.