Ag and Food Sectors and the Economy

The U.S. agriculture sector extends beyond the farm business to include a range of farm-related industries. The largest of these are food service and food manufacturing. Americans' expenditures on food amount to 12 percent of household budgets on average. Among Federal Government outlays on farm and food programs, nutrition assistance far outpaces other programs. 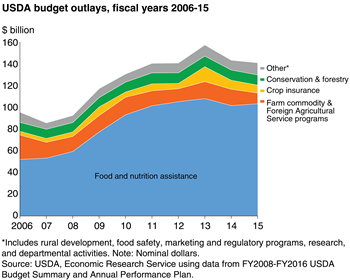