by Mildred Haley and Fred Gale

Although the rapid spread of African Swine Fever (ASF) across China decimated the world’s largest swine herd in 2019, it has created significant export opportunities for the U.S. pork industry.  In the United States, recent industry expansion and low prices helped the industry export more pork to China, despite high retaliatory tariffs on U.S. pork.

After the first cases of ASF in China were reported in August 2018, the virus spread to every province by mid-2019 (see textbox for disease description and stylized facts). Assessments by industry observers suggest that the number of ASF outbreaks and losses of swine far exceeded officially reported numbers. As mentioned earlier, China’s swine herd was decimated—both by loss of infected animals as well as precautionary slaughter of entire herds by farmers worried that their animals might soon be infected. Chinese Government statistics showed a decline in swine inventory of more than 40 percent from a year earlier in October 2019, and pork output for the fourth quarter was down more than 30 percent from a year earlier. China’s National Bureau of Statistics estimated that a 97-percent increase in pork prices accounted for more than half of the 4.3-percent increase in China’s December 2019 consumer price index from a year earlier. High Chinese pork prices due to ASF losses, and relatively low U.S. pork prices due to processing-sector expansion, have created opportunities for mutually beneficial trade between China and the United States.

In the absence of a cure for ASF or an effective vaccine against it—neither of which currently exist—sector recovery is likely to be slow and protracted. For 2020, USDA data and forecasts indicate that China’s pork production will fall to 36 million metric tons (mmt), a decrease of more than 33 percent from the 54 mmt produced in 2018. 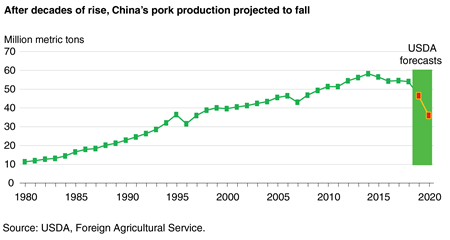 China’s 2020 pork imports are expected to reach a record 3.7 mmt, more than double its imports of 1.6 mmt in 2018. China’s import increases will offset a fraction of the 21-mmt production decline. Despite the surge of imports, Chinese consumption of pork is expected to decline dramatically, as consumption of poultry and other animal protein substitutes increases. Estimated 2020 Chinese per capita pork disappearance, or availability per person, falls to 62 pounds from 88 pounds in 2018. 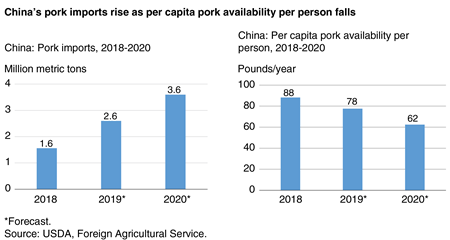 Anecdotal information suggests that consumers, cafeterias, and food service establishments cut back on pork purchases as pork prices soared to more than double their previous-year levels in the second half of 2019. 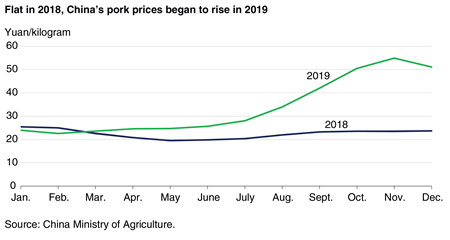 The disruption in China’s pork supply has major implications for pork producers in the United States and other exporting countries. Pork is the most consumed meat for China’s 1.4-billion population, and its pork consumption and production normally account for about half the world total. Before the ASF epidemic, China’s pork output was double that of the European Union (EU) and more than five times U.S. production. The 88 pounds of pork supplied per person in China during 2018 was a third higher than the United States, reflecting much higher per capita consumption in China.

In recent years, China imported about 2 to 3 percent of the pork it consumed. Major suppliers were EU countries, the United States, Canada, and Brazil. Currently, rising Chinese imports and greater export opportunities are positive for the U.S. pork sector.

Recent expansion of production capacity before ASF reached China leaves the U.S. industry well positioned to meet rising demand from China. Expansion of 3 large hog-processing facilities in 2 Midwestern States beginning in 2017 led to a 12-percent increase in weekly U.S. processing capacity from about 2.5 million head in 2015 to more than 2.8 million head in 2019. U.S. hog production expanded to meet greater demand from processors. The U.S. inventory of breeding animals increased by more than 450,000 head—almost 8 percent—between December 2015 and December 2019 according to data from the USDA, National Agricultural Statistics Service (NASS). The USDA, Economic Research Service and World Agricultural Outlook Board have forecast an acceleration of commercial pork production above its previous trend as the sector expansion gains traction. USDA forecasted a 5-percent increase in U.S. pork production in 2019, and forecasts a 3.6-percent increase in 2020. 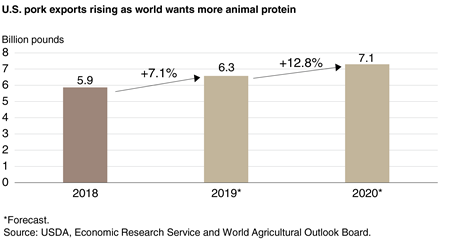 ERS export data show that U.S. pork exports to China through November 2019—more than 790 million pounds (almost 360,000 metric tons)—were more than double the volume of the same period in 2018. The increase is notable because China imposed retaliatory tariffs of 50 percent in April and July 2018 on most U.S. pork products. The tariffs, which remained in place through 2019, put U.S. pork at a disadvantage compared with pork from competing countries such as the EU, Brazil, and Canada. Chinese customs data for 2019 showed that U.S. pork accounted for 11 percent of China’s pork imports through November 2019, while European pork accounted for 63 percent.

U.S. pork exports to China could be boosted by the Phase I trade agreement signed by the United States and China January 15, 2020. Although the agreement does not lift China’s retaliatory tariffs, pork and swine offal were among the U.S. agricultural products targeted for increased Chinese purchases in 2020. China’s strong demand and plentiful U.S. supply of competitively priced pork are expected to draw interest from Chinese buyers in 2020.

African Swine Fever (ASF) is a highly contagious hemorrhagic virus that infects swine. The virus is lethal to both domestic and wild swine, killing hogs and pigs within 6-13 days after infection. Mortality rates can be as high as 100 percent. Currently there is neither a cure nor an effective vaccine against the virus. The ASF virus cannot be transmitted from swine to people; therefore it presents no (immediate) public health threat.

These stylized facts highlight the extreme difficulty of eradicating the ASF virus1: