Between July 2016 and July 2017, overall population in nonmetro counties increased for the first time this decade, according to estimates released in March 2018 by the U.S. Census Bureau. This upward trend in nonmetro population change coincides with improving nonmetro employment trends. However, the overall nonmetro population change since 2010 remains negative, in contrast with an overall growth rate of 6.3 percent in metro areas during that same period.

Nonmetro America also "loses" population every 10 years when nonmetro counties that have grown large enough become reclassified as metro. In the latest decennial update announced by the Office of Management and Budget in March 2013, 113 formerly nonmetro counties (with 5.9 million people) switched to metro status, while 36 counties (with 1 million people) no longer qualified as metro, resulting in a net nonmetro population "loss" of 4.9 million from reclassification. In the long run, removal of fast-growing counties means nonmetro America is less likely to sustain overall population growth. 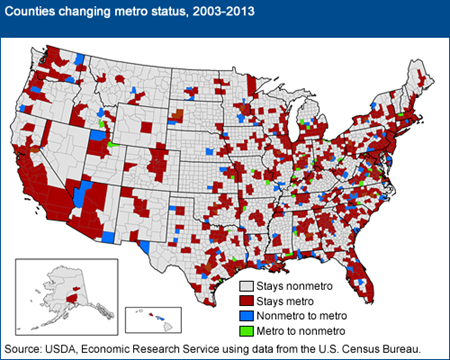 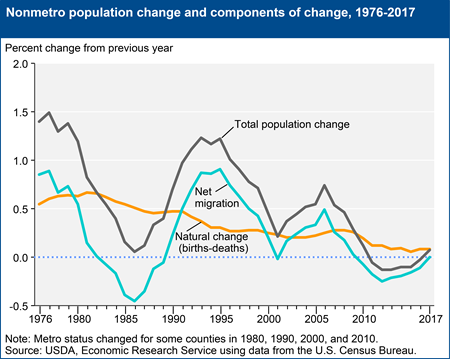 Lowering rates of natural change contributed to greater population decline in nonmetro areas and resulted in 349 counties experiencing sustained natural decrease during 2010-17 for the first time. The map shows natural change for all counties, metro and nonmetro. Urbanized areas (shown in dark gray) are at the center of metro areas, and nonmetro counties are those that are removed by some distance, depending on the size of the metro area. 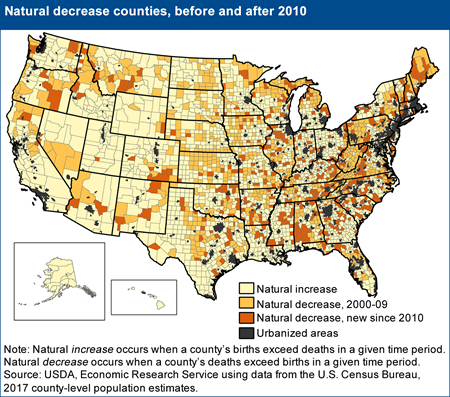 The cyclical downturn in net migration that began in 2007 bottomed out in 2012, and improving population trends since 2012 coincide with a marked improvement in nonmetro employment growth. Although it appears to have ended for now, the period of overall population loss during 2010-17 highlights a growing demographic challenge facing many regions across rural and small-town America: Population growth from natural increase is no longer large enough to offset cyclical net migration losses.

See the next chapter on: Shifting Geography of Population Change.