The Food Dollar Series divides the food dollar into a set of input-component values. There are three primary series—the marketing bill series, the industry group series, and the primary factor series. For each primary Food Dollar Series, the combined input-component values are equal to the $1 output-market value. The three series represent distinct perspectives on the sources of market value for the combined annual food dollar expenditures.

This page provides information on:

The marketing bill series is based on sales proceeds. Proceeds from each food dollar expenditure are divided into two sub-components of market value:

For calendar year 2021, the farm share was 14.5 cents of each food dollar expenditure and the marketing bill was 85.5 cents accounting for the remainder of the food dollar.

Value Added Component Series: For establishments contributing to the U.S. food supply, value added for an establishment equals the proceeds from the sale of outputs minus the outlays for commodities purchased from other establishments. The sum of value added by all establishments that contribute to total food dollar purchases equals $1. The industry group and primary factor series are based on this value-added concept. 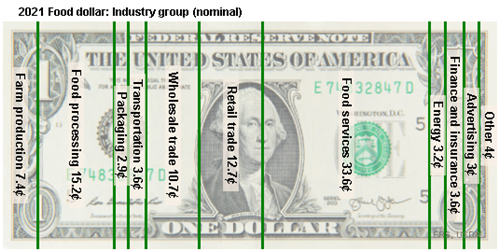 For calendar year 2021, the primary factor series indicates 50.3 cents of every food dollar expenditure go to the salary and benefits of domestic workers, 39.4 cents is dispensed as property income, and the remainder is split between U.S. Government (output taxes) and international assets (imports). 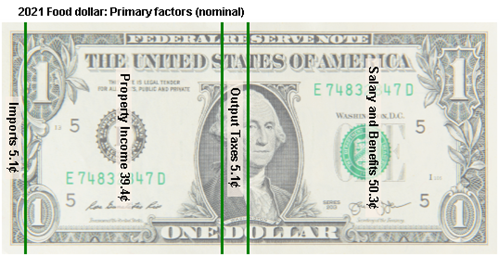 Cross-tabulated statistics of primary factor value added data by industry groups are displayed in table form because these data provide more detail than can effectively be displayed in a food dollar visual. The underlying detailed value-added data for 2021 are presented below:

Using conventional IO analysis, the annual marketing bill series is estimated for all available years from 1993 to 2021. The current data for 2013 to 2021 are preliminary and subject to revision when the next detailed U.S. benchmark IO accounts are released. The real (inflation-adjusted) 2021 data are also available.

With the BEA release of the 2012 detailed benchmark IO integrated in the Food Dollar Series for this release, a 2012 ERS benchmark was added for each Food Dollar Series; the same chain-weighted indexing methods were applied to update series data for the years 2006–2011, while the indexing procedures previously used to update the 2007 benchmark series data were applied to the 2012 benchmark. For more detail on these data sources and estimation methods, see the 2011 report:

A Revised and Expanded Food Dollar Series: A Better Understanding of Our Food Costs

Prior to 2021, to update BLS’ annual IO data released in even-numbered years—or the base year account—to an interim year account reported in odd-numbered years, ERS used a mathematical programming model to reconcile the more detailed base year account with the less detailed interim year account. The mechanics of this process are the same as is described in the ERS report A Revised and Expanded Food Dollar Series: A Better Understanding of Our Food Costs (link above, see page 39, equations A22 to A24), with the added dimension of bringing the accounts forward 1 year. Starting with the 2021 updates, BLS IO data are released annually so the interim year updates are unnecessary.