The 2022 highly pathogenic avian influenza (HPAI) outbreak has had relatively little impact on the broiler industry based on the volume of broiler meat produced in the United States. HPAI was detected in Indiana in February 2022 for the first time nationally since 2015 and was soon confirmed at multiple commercial poultry operations. Flocks at operations with detected infections were depopulated to prevent further spread of HPAI. Because of the limited overlap of the 2022 HPAI outbreak with broiler-producing regions, commercial flocks in the top four broiler-producing States (North Carolina, Georgia, Arkansas, and Alabama) have largely avoided HPAI. Of the 43.8 million commercial birds depopulated as of October 7, 2022, 2.3 million were meat-producing broilers. This represents less than a tenth of 1 percent of typical annual broiler slaughter. The effect on broiler production during the 2015 outbreak was also relatively small. Production reached a then-record volume, increasing nearly 4 percent from 2014. Broiler production has increased every year since and is forecast to total more than 45 billion pounds in 2022. This chart first appeared in USDA, Economic Research Service’s Livestock, Dairy and Poultry Outlook: September 2022 and has been updated with recent data. Over the past two decades, multiple States have passed animal welfare regulations in hog production. These regulations ban the common practice of using gestation crates—metal enclosures used to house pregnant sows—or stipulate space requirements for animals to stand and turn around. In addition to restrictions during production, two of these States, California and Massachusetts, passed retail sales restrictions that prohibit the sale of pork originating from animals kept in gestation-crate systems or their direct offspring. Hog welfare regulations are concentrated in States with relatively small pork industries. The proportion of the national herd covered by gestation crate bans is currently estimated at 3 percent based on expected production in 2022. Except for Michigan, each State with existing bans on gestation crates has produced, on average, less than 1 percent of total U.S. pork production (in pounds) since 2018. Ohio will become the largest hog-producing State to ban gestation crates when its regulations go into effect in 2026. Based on State hog inventories in December 2020, projected coverage of the total U.S. hog herd and the breeding herd is expected to remain below 10 percent of hogs and pigs under current State regulations through 2026. This chart is drawn from “State Animal Welfare Policies Covering U.S. Pork Production,” in the February 2022 Livestock, Dairy, and Poultry Outlook from USDA’s Economic Research Service. The human and animal pharmaceutical industries are closely linked, with similar research processes and business structures. However, although animal pharma is a large global presence ($23.9 billion in sales in 2014), human pharma is 42 times larger (nearly $1 trillion in sales in 2014). Because the human pharma market is more lucrative, many drugs are originally explored for use in humans. Human drug innovations historically also have been a source of new products in animal pharma. Conversely, trends in the numbers of new drug approvals in the United States for humans versus animals have diverged over time. Between 1971 and 2015, the number of new nongeneric drug approvals for animal use dropped from 154 to 30 annually, while those for human use climbed from 136 to 392 annually. The higher number of approvals for human drugs reflects the larger size of the human pharma market. This divergence in the numbers of drug approvals may also be driven by changes in the focus of human medicine, which increasingly demands palliative care drugs that have fewer applications in the animal pharmaceutical market. This chart appears in the ERS report, The U.S. and EU Animal Pharmaceutical Industries in the Age of Antibiotic Resistance, released May 30, 2019. See also the Amber Waves article “Developing Alternatives to Antibiotics Used in Food Animal Production,” published in May 2019.

Farmer share of retail value of red meat is declining The spreads between farm prices for hogs and cattle and retail prices for pork and beef have widened over the past 18 months, leading to a decline in the farmer share of retail red meat prices. Growing cattle inventories and increased pork production are pushing cattle and hog prices lower. For the fourth quarter of 2015, hog prices (51-52% lean) averaged about $45 per hundredweight, down about 33 percent from a year earlier and nearly 50 percent below the prices received in the second quarter of 2014. Similarly, cattle prices (5-market steer price) averaged $128 per hundredweight in the last quarter of 2015, down nearly 23 percent from the fourth quarter 2014. Retail prices for both beef and pork are down as well, but by a smaller magnitude as they tend to adjust more slowly to changes in the farm price due to the wide variety of other costs—including labor, packaging, storage, and transportation—that also contribute to retail prices. This chart is based on the ERS Meat Price Spreads data product.

Among rising U.S. meat exports, pork has the highest value 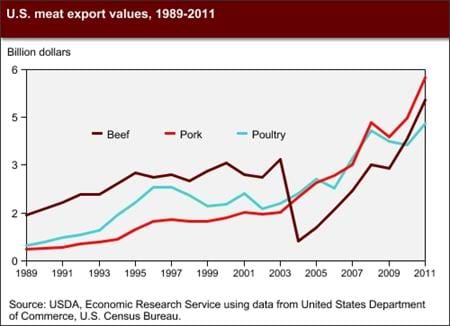 U.S. meat exports began to accelerate in the mid-1980s, and U.S. meat producers have become major players in rapidly expanding world meat markets. On a quantity basis, the greatest gains in U.S. meat exports since the 1980s have been in U.S. poultry exports. However, U.S. pork exports have posted the largest gains, in terms of export value, over the same time period and since 2008 have been the highest valued of U.S. meat exports. Beef was for many years the top U.S. meat export because it is, by far, the highest priced meat. The value of beef exports hit a record $3.2 billion in 2003 before dropping in response to the discovery of BSE, and then recovering. Until 2003, the value of beef exports had generally exceeded the value of pork and broiler meat exports as technical and organizational changes-feeding patterns, animal genetics, and industry structure, for example-exerted downward pressure on the prices of these meats relative to beef. Pork, in turn, is relatively higher priced than broiler meat, and the value of pork exports recently surpassed that of broilers as the quantity of pork exports has grown. This chart is an update of one found in the Animal Production & Marketing Issues topic on the ERS website.