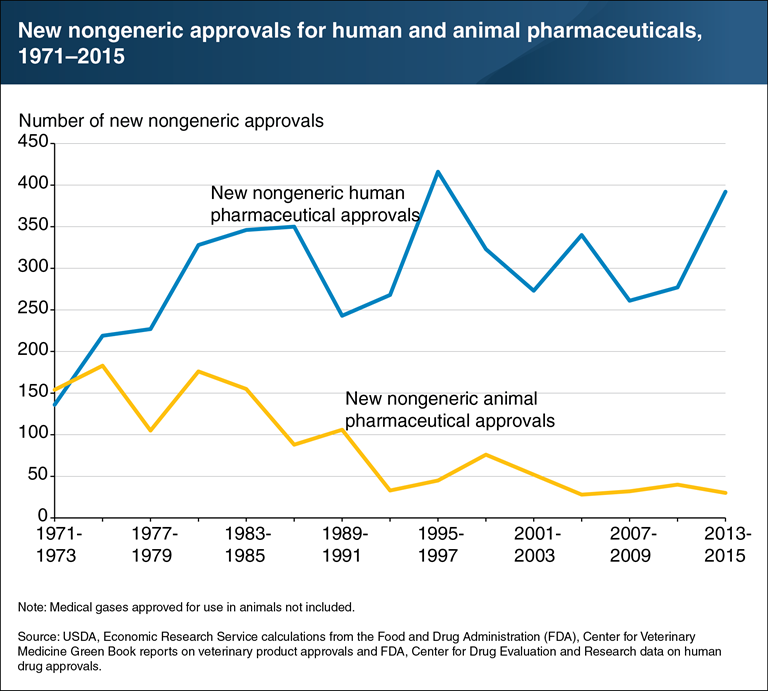 The human and animal pharmaceutical industries are closely linked, with similar research processes and business structures. However, although animal pharma is a large global presence ($23.9 billion in sales in 2014), human pharma is 42 times larger (nearly $1 trillion in sales in 2014). Because the human pharma market is more lucrative, many drugs are originally explored for use in humans. Human drug innovations historically also have been a source of new products in animal pharma. Conversely, trends in the numbers of new drug approvals in the United States for humans versus animals have diverged over time. Between 1971 and 2015, the number of new nongeneric drug approvals for animal use dropped from 154 to 30 annually, while those for human use climbed from 136 to 392 annually. The higher number of approvals for human drugs reflects the larger size of the human pharma market. This divergence in the numbers of drug approvals may also be driven by changes in the focus of human medicine, which increasingly demands palliative care drugs that have fewer applications in the animal pharmaceutical market. This chart appears in the ERS report, The U.S. and EU Animal Pharmaceutical Industries in the Age of Antibiotic Resistance, released May 30, 2019. See also the Amber Waves article “Developing Alternatives to Antibiotics Used in Food Animal Production,” published in May 2019.