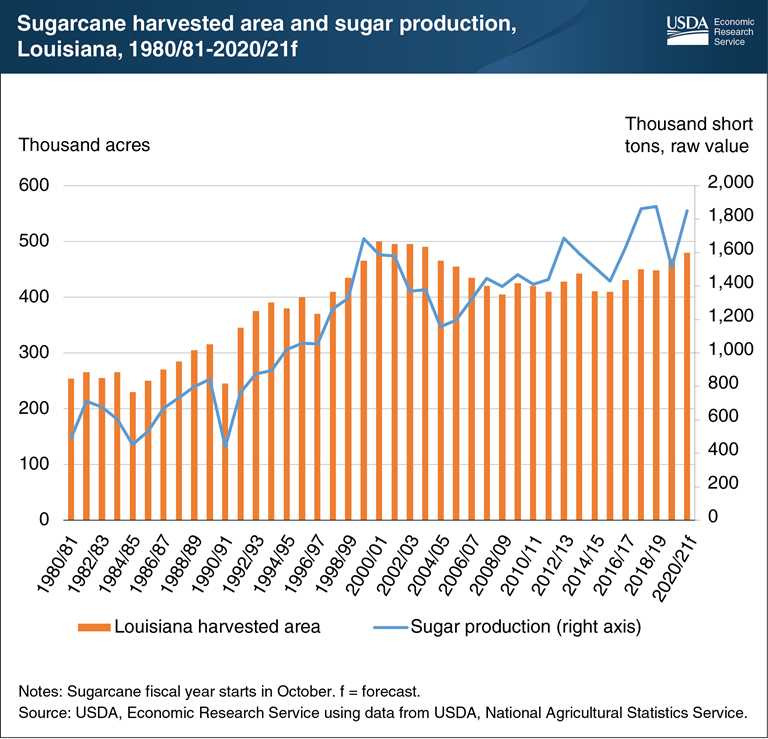 The United States is one of the world’s largest sugarcane producers. U.S. production of sugar from sugarcane is projected at about 4 million STRV (short tons, raw value—a standardized measurement of the raw or pre-processed available sugar) in 2020/21. Production is concentrated in Louisiana and Florida, with small amounts in Texas. In Louisiana, the recent development of new varieties of sugarcane has pushed production further north and west from traditional sugarcane-growing regions in the State, which is historically ranked first in harvested area but second in production behind Florida. Louisiana sugarcane grows in the northern-most latitude growing region in the world, where the harvest, compressed by cool winter conditions, typically starts in late September and ends by early January. This expansion in acreage has enabled the State to have record production of sugar from sugarcane in two of the last three years. Louisiana is expected to harvest 480,000 acres of sugarcane in 2020/21, the most since 2003/04. Louisiana cane sugar production is currently projected to once again exceed 1.8 million STRV in 2020/21, with Louisiana accounting for 45 percent of U.S. cane sugar production and 20 percent of domestic sugar production. This chart is drawn from Economic Research Service’s Sugar and Sweeteners Outlook: July 2020.