While Chinese imports are down, global cotton trade is projected at a 7-Year High in 2019 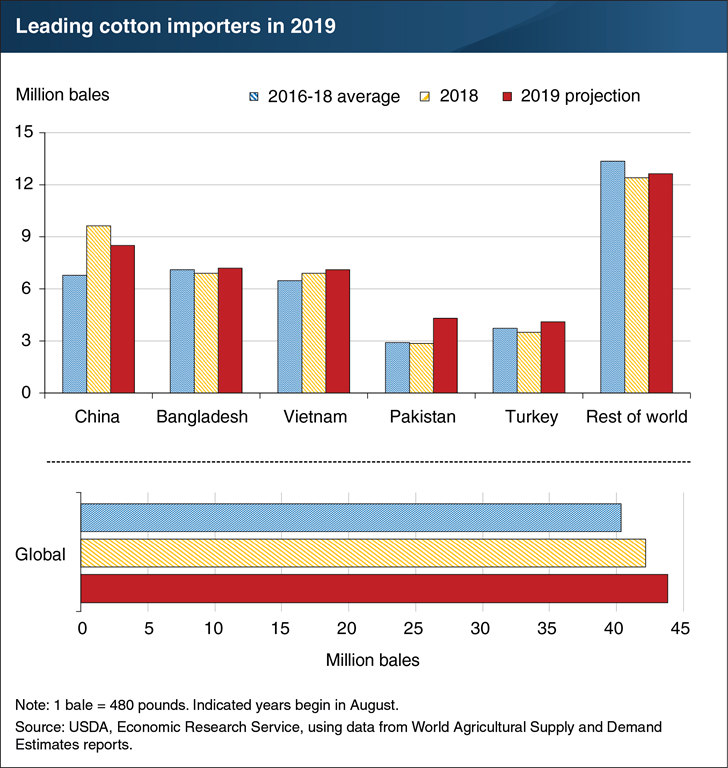 For 2019, increased imports are expected in many non-cotton-producing countries, as well as some producing ones. Although China—a major producer—is projected as the leading importer in 2019, its upcoming imports are expected to be below those from a year ago, as cotton mill use in China is forecast to decline for the second consecutive year. In contrast, all other major importers are anticipated to secure additional imports this year. For Bangladesh and Vietnam, higher cotton imports are seen as supporting the recent textile and apparel industry expansion. At the same time, a 3-decade-low production forecast for Pakistan in 2019 is expected to result in record-high cotton imports to help sustain its spinning industry. Meanwhile, higher imports are also forecast for Turkey and others in 2019. In fact, global cotton imports are forecast by the U.S. Department of Agriculture to rise for the fourth consecutive year in 2019 to 43.8 million bales, nearly 4 percent (1.6 million bales) above last year’s volume. The growing trend is significant for the United States, as more than 80 percent of U.S. cotton production is exported to numerous countries around the world, with the U.S. share of 2019 global trade forecast at 38 percent. The 2019 global import forecast would be its highest since 2012’s record of 47.6 million bales. This chart is based on data in the ERS Cotton and Wool Outlook Tables, released in January 2020.