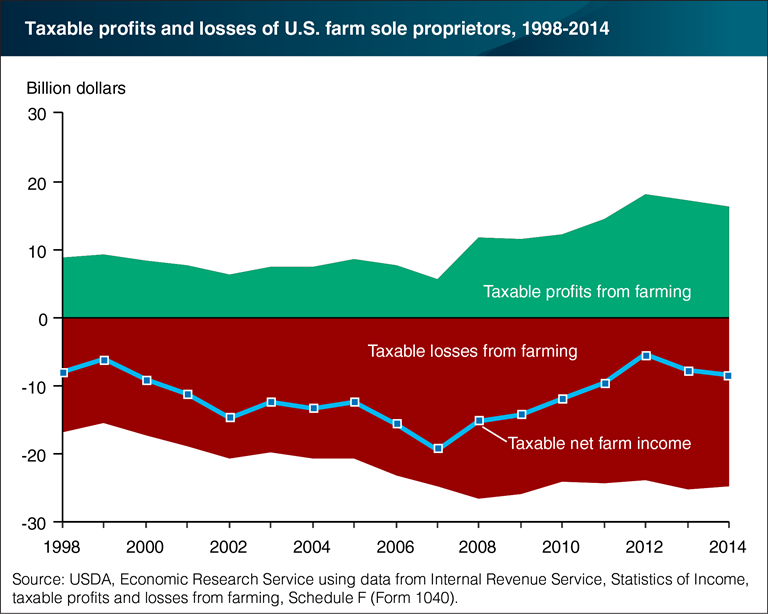 Nearly 90 percent of family farms are structured as sole proprietorships. These entities are not subject to pay income tax themselves; rather, the owners of the entities (farmers) are taxed individually on their share of income. Numerous Federal income tax law provisions allow farmers to reduce their tax liabilities by reporting losses. From 1998 to 2008, for example, taxable losses from farming (the red area of the chart) rose from $16.7 billion to $24.6 billion. This was due, in part, to changes in the tax code beginning in 2001 that expanded the ability of farms to deduct capital costs—such as tractors and machinery—in the year the equipment was purchased and used. Between 2007 and 2014, strong commodity prices bolstered farm-sector profits (the green area), but taxable net farm income (the blue line) remained negative. Farm sole proprietors, in aggregate, have reported negative net farm income since 1980; in other words, they’ve reported a farm loss due to higher farm expenses than income. In 2014, the latest year for which complete tax data are available, U.S. Internal Revenue Service data showed that nearly 67 percent of farm sole proprietors reported a farm loss. This chart appears in the ERS topic page for Federal Tax Policy Issues, updated January 2017.