U.S. sugar and sweetener trade with Mexico grew under NAFTA 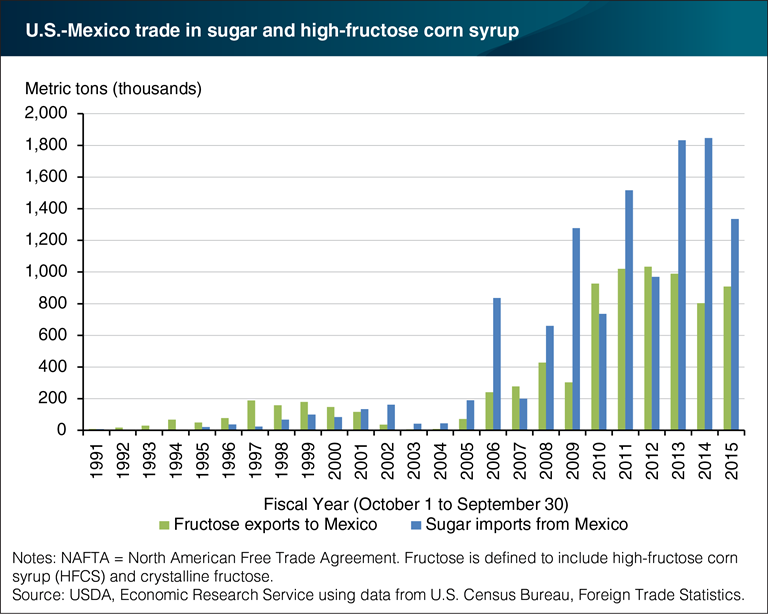 Agreement by the United States and Mexico to implement the provisions of the North American Free Trade Agreement (NAFTA) with respect to bilateral trade in sugar and sweeteners starting in fiscal year 2008 led to a substantial increase in this trade. During fiscal years 2011-15, U.S. sugar imports from Mexico averaged about 1.5 million metric tons per year—contributing about 12 percent of the U.S. sugar supply—and U.S. exports of high fructose corn syrup (HFCS) to Mexico averaged about 950,000 metric tons—equal to about 12 percent of U.S. production. Agreements reached in December 2014 to suspend U.S. antidumping and countervailing duty investigations on sugar imports from Mexico imposed new restrictions on the quantity, price, and composition of U.S. imports of Mexican sugar. However, these measures still allow for larger volumes of trade than prevailed before 2008, and before the start of NAFTA’s implementation back in 1994. This chart is from the ERS report, A New Outlook for the U.S.-Mexico Sugar and Sweetener Market released on August 11, 2016.