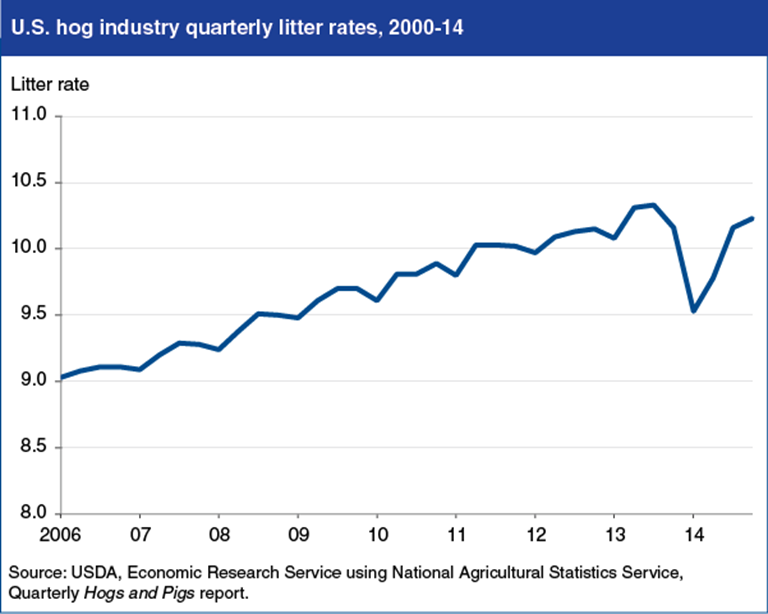 The litter rate (pigs per litter) is an efficiency indicator of the U.S. hog industry. Litter rates have been steadily increasing over time due to improvements in genetics, diet, and animal care and management. The emergence of Porcine Epidemic Diarrhea virus (PEDv) in the U.S. swine herd in the spring of 2013 caused a sharp—but temporary—drop in litter rates. PEDv afflicts young piglets in particular, and caused millions of newborn pigs to die as the disease spread to herds in 33 States. The virus flourishes in cold, damp climates, so its effect on litter rates was strong in the fall and winter months of late 2013 and early 2014. The pigs-per-litter rate began to decline in the fourth quarter of 2013, and then dropped sharply in the first quarter of 2014. Litter rates rebounded in the spring of 2014, responding to the warmer, dryer climates and to aggressive actions by producers, including increased biosecurity measures and vaccination. These measures contributed to lower disease incidence and limited losses of newborn pigs from PEDv; they are also expected to limit the incidence of the disease this winter and will help to minimize the impact of future outbreaks. This chart is based on information in the January 2015 Livestock, Dairy and Poultry Outlook.