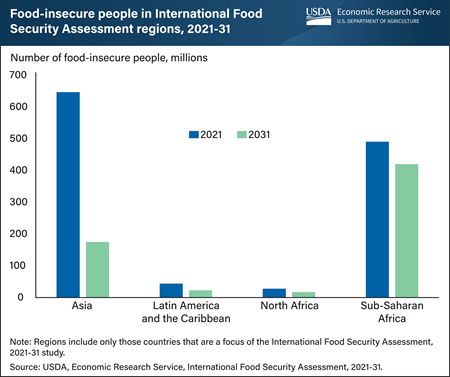 About a third of the 3.9 billion people in 76 low and middle-income countries may not have consistent access to adequate calories needed to sustain a healthy and active lifestyle in 2021, according to the latest International Food Security Assessment (IFSA) released by USDA’s Economic Research Service (ERS). The IFSA model looks at per capita food demand and compares that estimate with a daily 2,100-calorie nutritional target set by the United Nations to forecast long-term projections of food security and nutrition. The number of people without access to 2,100 calories a day—the food-insecure—is estimated at 1.2 billion, an increase of almost 32 percent (291 million people) from the 2020 estimate. Most of the additional 291 million people estimated to be food insecure are in Asia (72 percent) and in Sub-Saharan Africa (21 percent). By 2031, income growth across the IFSA regions is projected to accelerate, especially if the effects of the COVID-19 pandemic on local economies recede. Slower population growth coupled with an expectation for lower food prices over the next decade will reduce the number of people considered food insecure to 642.4 million in 2031, the IFSA study projects. The share of the population that is food insecure in the 76 countries studied is projected to fall to 14.1 percent, a 54.4 percent drop from its 2021 estimate. This chart appears in ERS’ International Food Security Assessment, 2021-2031 situation and outlook report.