People around the world are shifting away from diets of mostly staple foods and are eating more processed food and meals away from home that can be high in salt, fat, and sugar. For instance, USDA’s Economic Research Service (ERS) reported in 2017 that as incomes rose in developing regions such as Sub-Saharan Africa, people tended to consume more processed foods. This change in eating habits is known as nutrition transition. Combined with more sedentary lifestyles, nutrition transition can lead countries to experience the “double burden of malnutrition.” That is, obesity and under-nutrition may occur at the same time. (For more information, please see ERS’ International Consumer and Food Industry Trends topic page.)

Researchers from ERS and Michigan State University recently studied geographic and demographic patterns of consumption of processed food in one Sub-Saharan African country, Tanzania. This study helps show who is consuming processed food and where, as well as the factors that drive such consumption. It also sheds light on potential dietary changes in other countries experiencing demographic changes similar to those in Tanzania. The researchers used data from Tanzania’s Household Budget Survey, which collected information on, among other things, household members’ employment situation, education, assets, and food consumption. For the food consumption information, the survey relied on a 28-day diary filled out by a household member. Researchers classified each food product by five levels of processing:

Researchers also used geographic information to categorize rural households by the driving time, in hours, from the nearest urban area.

The results obtained from Tanzania echo ERS research on U.S. eating patterns. A report from 2018 showed that higher U.S. household incomes and greater time constraints (for example, because of higher participation of women in the workforce) are correlated with the purchase of highly processed food and meals eaten away from home. Taken together, these findings suggest that in Tanzania, as in the United States, increasing incomes and changing employment patterns are associated with higher consumption of ultra-processed food and meals eaten away from home, raising concerns about obesity and the so-called double burden of malnutrition. 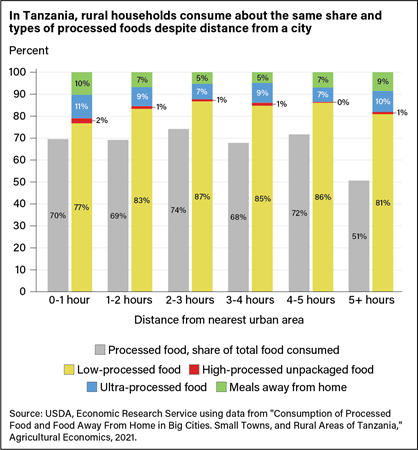