Farm incomes are volatile and farm households employ a variety of financial strategies to generate the necessary cash flows to maintain a standard of living that is based on their expected average income over time—a process called “consumption smoothing.” Households save, invest, and work fewer hours off the farm when farm income is higher than expected and spend down their savings, borrow, disinvest, or work more at off-farm jobs when farm income is lower than expected. The marginal propensity to consume (MPC) out of income—how much an additional dollar of income increases consumption spending—tells researchers how well households are able to smooth their consumption. The larger the MPC, the less the household is smoothing consumption.

USDA created the Market Facilitation Program (MFP) to assist farmers in response to trade disruptions resulting from retaliatory tariffs in 2018 and 2019. The 2018 program was announced in August 2018 and was distributed in two tranches—in fall 2018 and in early 2019. The 2019 program consisted of three tranches, two in 2019 and one in early 2020.

USDA, Economic Research Service researchers and a collaborator at Purdue University estimated the MPC from off-farm income, net farm income less Government payments, MFP payments received in 2018, MFP payments received in 2019, and other direct Government payments between 2014 and 2019. They estimated the MPCs separately for households operating three types of farms:

Researchers found that changes in off-farm income, net farm income less Government payments, and Government payments excluding the MFP payments changed household consumption relatively little. That indicated the households were able to smooth the consumption of these sources of income. The MPC’s from the MFP payments were considerably larger, particularly for residence farms. Even so, they differed between the 2 years. 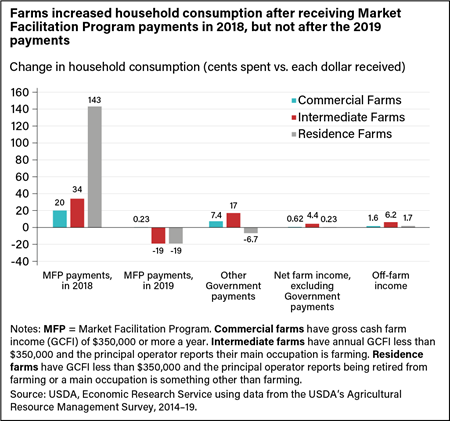