Cover Crops Can Influence Soil Health, Even Within the First Few Years After Adoption

by Maria Bowman and Stephen Wood

Farmers are often motivated to plant cover crops to improve soil health. However, research on how adjustments in management practices affect soil health often is conducted in controlled, experimental settings, rather than on farms. At the same time, many soil health indicators and processes respond slowly to management—which means it can be difficult to observe changes in the first few years after implementing a new management practice. New research shows some soil health indicators increased slightly over time with the use of cover crops. The research was based on data from trial fields of farmers participating in the Soil Health Partnership of the National Corn Growers Association, a program that worked with farmers to study soil health practices from 2014 to 2021.

For their study, researchers used data from 78 farms across 9 States over 3 to 5 years from 2015 to 2019. Most of the farms were in Indiana, Illinois, and Iowa. The researchers examined changes in six key soil health indicators (active carbon, soil organic matter, respiration, aggregate stability, available water capacity, and soil protein) that are part of the Cornell Comprehensive Assessment of Soil Health and reflect the biological and physical properties of soil. Four (active carbon, soil organic matter, respiration, aggregate stability) of the six soil health indicators showed evidence of change with cover crops, compared to the control strips without cover crops:

The researchers also found evidence that these four indicators improved with more years of cover crop use, which suggests that the benefits of soil health management grow with time. However, these changes are small and occur slowly. For example, in the researchers’ dataset, aggregate stability increased by only 1.02 percent per year more on cover crop strips than control strips—and soil organic matter by only 0.01 percent more per year. Although farmers might expect to see large changes in indicators such as soil organic matter in the first 3 to 5 years of cover crop use, the research results suggest any changes in this timeframe are likely to be small. Furthermore, it can be difficult to reliably detect small changes in the soil with existing soil sampling and laboratory methods. 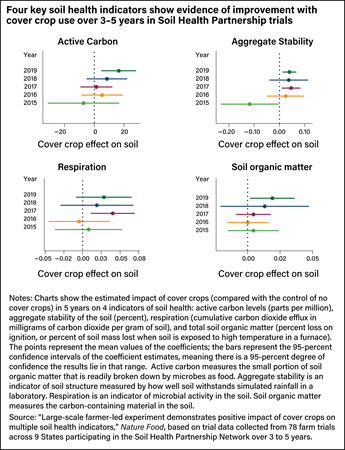