Self-Employed Workers Are Less Likely To Have Health Insurance Than Those Employed by Private Firms, Governments

by Elizabeth A. Dobis and Jessica E. Todd

With less access to employer-sponsored group health insurance plans, self-employed workers could buy a plan directly from an insurance company or through the Federal health insurance marketplace established by the Affordable Care Act. They also could obtain coverage from a publicly subsidized plan such as Medicaid or from a family member’s employer-based plan.

In nonmetro counties, a greater share of self-employed working-age adults (29.3 percent) were covered by direct-purchase health insurance plans than those who worked for others, were unemployed, or were outside the labor force. Families with direct-purchase plans paid more per person in insurance premiums in 2018 than families with other sources of health insurance coverage. Nearly twice the percentage of nonmetro self-employed workers were insured through public plans such as Medicaid than those employed through private firms or governments (22.0 percent versus 12.1 percent). Families covered by public health insurance plans paid the least in premiums per person. 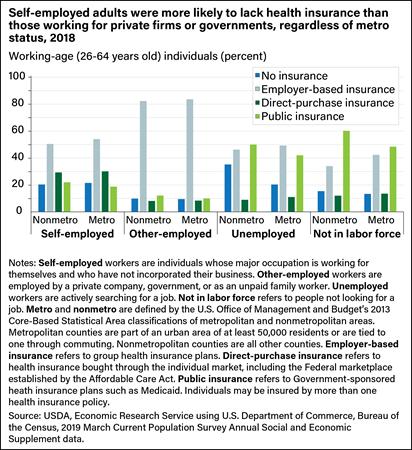 Health Care Access Among Self-Employed Workers in Nonmetropolitan Counties, by Elizabeth A. Dobis and Jessica E. Todd, ERS, May 2022