Most agricultural lenders extend loans based on their assessment of a borrower’s ability to repay debt. Because of this, some farmers may not be able to secure as much credit as they would like for their farm businesses. A lack of credit could prevent these farmers from expanding production or could restrict investments in productivity-enhancing technologies. Off-farm income may help some farm households qualify for larger loans, which could lead to higher farm output, productivity, and profit.

Using farm-level data from USDA’s Agricultural Resource Management Survey, the USDA, Economic Research Service (ERS) estimated the effect of off-farm income on farm borrowing, investment, operation size and productivity from 2007 to 2016. ERS compared farms that had similar characteristics but differed in the educational attainment of the operator’s spouse. Including educational attainment in the statistical model allowed ERS to clearly identify the primary relationships of interest because the differences in educational attainment were linked to variations in off-farm income. For example, farm households in which the spouse did not graduate from high school earned an average of $62,400 (including investments) off farm per year, compared with $141,000 when the spouse completed at least 4 years of college.

The findings suggest that additional off-farm income could ease the credit constraint many farmers face, thus increasing their ability to borrow and invest. That would permit producers to put more money into their farmland and equipment, thereby increasing productivity. 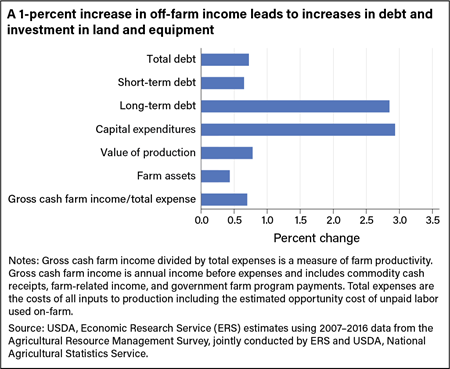