India is the world’s leading importer of soybean oil, ahead of the European Union and China. Over the past decade, domestic soybean oil use in India has grown by double-digit percentages. By 2018-19, India imported about 63 percent of its domestic soybean oil consumption, with its imports accounting for more than 42 percent of global soybean oil imports. The United States is typically not a price-competitive supplier to the Indian soybean oil market, supplying only 1 percent of India’s imports with a cumulative value of about $125.5 million between 2012 and 2019. During the same period, the U.S. average export price of soybean oil to India was about 42 percent higher than Argentina’s price and 38 percent above that from Brazil. Argentina was responsible for about 75 percent of India’s soybean oil imports in 2019.

While soybean oil imports are strong, India’s imports of whole soybeans are negligible because of tariffs (the current import duty is 57 percent), as well as phytosanitary requirements and a ban on production or imports of genetically modified (GM) soybeans. Because domestic soybean supply is limited to slowly expanding domestic production, India’s mostly small-scale soybean processing industry is generally faced with constrained soybean supplies, relatively high soybean prices (see figure), and relatively high unit-processing costs. These factors tend to raise consumer soybean oil prices and, in some market conditions, put downward pressure on the soybean prices that processors can afford to pay growers. 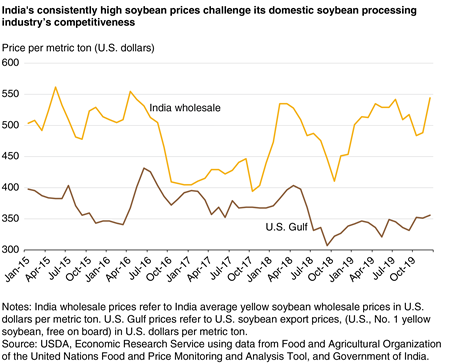 USDA, Economic Research Service analyzed the potential impacts on Indian farmers and soybean imports. Model-based simulations find that India’s processors could obtain substantial economic benefits from improved access to imported soybeans. Soybeans are crushed into soybean meal and soybean oil by the Indian crushing industry at higher costs than in other major processing countries. Reduction of trade barriers could enable growth of more efficient, larger-scale processing plants that produce soybean oil at lower consumer prices, as well as increased supplies of soymeal for the domestic and export markets.

Model simulations also indicate that allowing soybean imports could be accomplished while also meeting the important Indian policy goal of supporting domestic growers. As a major commercial importer of soybean oil and a significant exporter of soymeal, India is already largely a taker of the key world prices, adjusted for tariffs, that dictate the price of soybeans that its processors can profitably pay to growers. Government efforts to raise soybean support prices can interfere with the viability of processors, but soybean imports—with a relatively small tariff—could maintain a floor under domestic producer prices and continue to maintain processor viability.

As the world’s top producer of soybeans, the United States is in a good position to compete in the Indian market, should reforms to tariff and non-tariff barriers permit. However, India’s long-standing restriction on imports of most GM crops, including soybeans, remains a prohibitive hurdle for U.S. soybeans. India’s recent imports have been in small amounts of non-GM soybeans from minor suppliers. At present, insect-resistant (Bt) cotton is the only GM crop approved for cultivation in India, and soybean and canola oils derived from GM seeds are the only GM food products that may be imported. Two other GM crops (eggplant and mustard) have been approved for cultivation by the regulating authority but have been awaiting government clearance for several years.