by Joanne Guthrie, Biing-Hwan Lin, and Travis A. Smith

In 2005, the Dietary Guidelines for Americans began recommending that half of Americans’ grain intake be whole grain. Following this advice, in the 2012–13 school year, USDA nutrition standards began to require that half of all grain products served to the 30 million children who participate in the National School Lunch Program be whole-grain-rich. Those whole-grain-rich products must range between 50 and 100 percent whole grain. Breakfasts offered through USDA’s School Breakfast Program, which serves 14 million children, were required to meet this standard by the 2013–14 school year, while grain products sold outside the USDA meal programs (snacks, etc.) were required to be whole-grain-rich by the 2014-15 school year. A recent study by ERS and University of Georgia researchers found that in 2013–14, food obtained at school—a category made up primarily of USDA school meals but also including any non-USDA snacks or meals obtained at school—contained a higher share of whole grains than home-prepared foods consumed by children throughout the day.

The researchers used federally collected, nationally representative food consumption survey data spanning 1994–2014, giving them a sample of 17,016 children aged 5–19 years who were attending school at the time of the survey. For each child, in-person interviews provided information on types and amounts of foods consumed and where each food was obtained, over a 24-hour period. The researchers found that the ratio of whole grain to total grain consumption in the children’s total diets fell from 9.7 percent in 1994–98 to 7.5 percent in 2003–04 before climbing to 13.5 percent in 2013–14. Before 2013–14, home-prepared foods had a higher whole-grain-to-total-grain ratio than foods from schools, as well as restaurants and fast food establishments. But in 2013–14, the whole-grain-to-total-grain ratio of school foods surpassed other sources, including home-prepared foods. 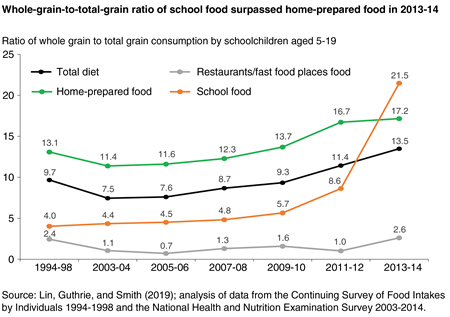