Measuring the global and regional incidences of foodborne diseases and their negative health effects—or burdens—is an important first step to manage the safety of food around the world. Estimates of disease burden can help inform government and commercial efforts to improve food safety, particularly in low-income regions where disease burdens can be high and resources to combat diseases are scarce. Globally, animal-source foods—meats, fish and shellfish, dairy products, and eggs—account for approximately one-third of the total burden of foodborne disease.

Foodborne disease outcomes vary by pathogen (typically, a bacterium or a virus) and differ in severity from a few days of diarrhea to chronic kidney disease and even death. To account for this variability, burden for a specific disease is measured in Disability Adjusted Life Years (DALYs)—the number of years of life either lost to premature death or spent at a lower level of health than would have occurred without the foodborne disease—weighted by the severity of the disease. One DALY is the equivalent of 1 year of healthy life lost. The World Health Organization (WHO) estimates that in 2010, with a world population of 6.9 billion, global foodborne diseases resulted in 600 million illnesses, 420,000 deaths, and 33 million DALYs.

A USDA, Economic Research Service researcher collaborated with scientists from the University of Florida and other institutions to estimate the burden of 13 foodborne diseases caused by 8 animal-source foods. Estimates were prepared for each of 14 WHO global burden of disease subregions defined by child and adult mortality rates. The researchers found that six pathogens account for 86 percent of lost DALYs caused by foodborne illness from animal-source foods worldwide. Three major pathogens—Salmonella, Taenia solium (pork tapeworm), and Campylobacter—were responsible for 77 percent of this burden.

Liver fluke (Opisthorchis ), also primarily associated with fish and linked with increased risk of bile duct cancer, accounts for 28 percent of foodborne disease burden from animal-source foods in the subregion B countries of South East Asia. 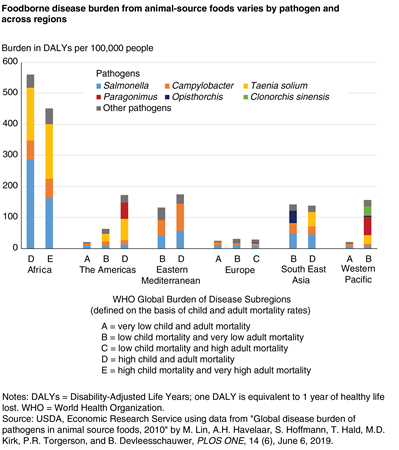