USDA’s Special Supplemental Nutrition Program for Women, Infants, and Children (WIC) provides nutritious foods to low-income pregnant, breastfeeding, and postpartum women and to infants and children up to age 5. The program also provides nutrition education, healthcare referrals, and breastfeeding support. Participants receive monthly benefits that can be redeemed for specific sets of foods (known as WIC food packages) that are tailored to supplement participants’ diets with specific nutrients. Every 10 years, USDA reviews the WIC food packages and, if necessary, revises them to ensure they align with the goals of the Federal Dietary Guidelines for Americans.

Economic Research Service researchers used store-level sales data from IRI, a private market research company, to examine trends in the availability of WIC-approved 16-ounce packages of 100-percent whole-wheat bread (defined in the study to include loaves, buns, and rolls) from 2009 to 2015 and their price relative to other package sizes of 100-percent whole-wheat bread. 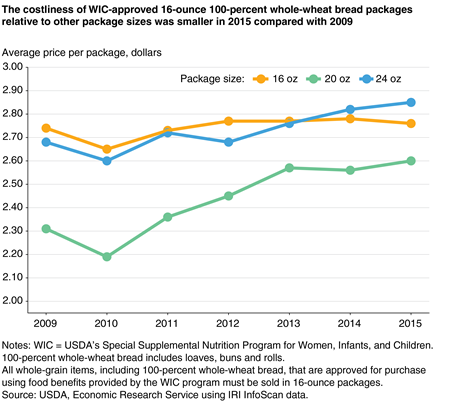