by David Boussios and Erik O'Donoghue

Under Title I of the Agriculture Improvement Act of 2018 (also known as the 2018 Farm Bill), farmers receive commodity-crop income support only if revenues or prices fall below predetermined thresholds. This provision of income support through conditional programs—specifically, Agriculture Risk Coverage (ARC) and Price Loss Coverage (PLC), the two largest programs (first authorized by the Agricultural Act of 2014 (2014 Farm Bill))—causes uncertainty to how much income support farmers will receive annually. Because commodity prices regularly fluctuate due to weather, trade, and other factors, these conditional payment programs have increased the variability of government spending since they were instituted in 2014.

To better understand the differences between prior income support payments and the newer conditional payments, ERS researchers compared total payments under the largest of Title 1 commodity-income support programs from 2010 to 2018 for corn, soybeans, and wheat. In the years leading up to 2015, commodity-income support was predominantly from direct payments, which paid farmers roughly the same amount each year. Although other conditional payment programs existed at the time, such as counter-cyclical payments (CCP), Average Crop Revenue Election (ACRE), and the Supplemental Revenue Assistance Program (SURE), the rise in commodity market prices reduced the total amount of conditional payments paid by the U.S. Government. Naturally, with mostly unconditional payment programs providing income support, payments remained reasonably constant across the years leading up to the 2014 Farm Bill. Under these unconditional programs, corn base acres received the largest amount of income support (larger than soybeans and wheat), in part, because corn covered the largest number of enrolled acres. The creation of ARC and PLC, and in combination with a decline in prices from 2012 peaks, has increased the variability of payments more recently. For example, in 2016, the combined expenses across these three crops and two programs were $6.4 billion. In just 2 years, 2018, this number decreased by $4.6 billion to $1.8 billion. The most significant cause of the drop in income support is due to declining historical benchmark revenues caused by lower corn prices. The ARC program pays farmers if revenues fall below the average of the previous 5 years’ revenue (discarding the highest and lowest years) for the county in which the farm resides. Because of unusually high commodity prices from 2011 to 2015, the benchmark price was higher in 2016 ($5.29) than in more recent years ($3.70), creating the potential for higher payments. For wheat, the payment variation is attributable to annual price fluctuations that determine PLC payments. Similar to the old CCP programs, PLC pays if prices fall below congressionally mandated levels. The PLC paid wheat acres $500 million in 2016 and nearly $1.3 billion in 2017. Although soybean outlays averaged the smallest of these three crops and provided income support only through ARC, 2016 soybean outlays exceeded $1 billion. In no other year did the costs exceed $400 million.

Having continued ARC and PLC with modest rule changes over the 2019-23 crop years, the 2018 Farm Bill extended the uncertainty of how much income support the Government will provide farmers in future years. One of the 2018 Farm Bill’s most potentially significant new provisions is that of allowing farmers to change their program election decision in 2019 for both the 2019 and 2020 crop years. Under the 2014 Farm Act, farmers made their election decision of either ARC or PLC in 2014, and it remained fixed until 2018. Under the new provision, farmers will not only be allowed to change their election decisions in 2019, but beginning with the 2021 crop year, their decision can change every year until the legislation expires. The increased frequency of elections will better enable farmers to select the program that will give them the most income support. 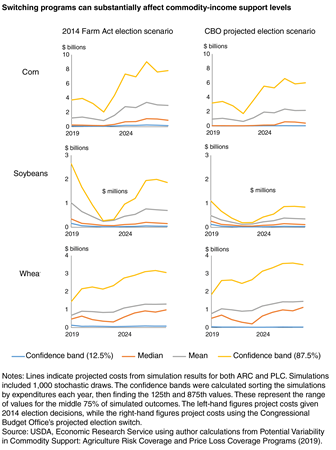 The results highlight the wide range of potential program costs moving forward by displaying the lower and upper confidence bands. For corn base acres alone, the middle 75 percent of outcomes range from costing roughly zero to $4 billion in each of the first 2 years. The costs for soybeans range widely in the first 2 years, but condense in 2022 as prices are expected to recover from current levels. The costs for wheat base acres are expected to expand over time.

The differences in income support across the two election scenarios correspond to how many base acres farmers will pull out of ARC and put into PLC. The results show the scenario with a higher proportion of ARC election, the lefthand figures, will likely pay farmers more than PLC for corn and soybeans. These increased payments are especially likely in the case of soybeans because the projected prices are not expected to fall significantly below the effective reference price that determines whether payments occur, though recent trade movements could influence the likelihood of these outcomes occurring. In contrast, payments are not likely to vary considerably across these election scenarios for wheat base acres because—although they are expected to be slightly higher for PLC—payments are likely for both programs.

The results also highlight the size and frequency of payments from ARC and PLC. Across all six subfigures, the average expected costs each year exceed the median value. This discrepancy between average and median values is due to the skewed distribution of payments, where program costs can be substantial if commodity prices fall significantly but are zero when prices are high. Given the formulas for calculating payments, which set a lowest bound for payments at $0, the distribution is expected to skew upward. This skewed distribution, noted by the large difference between the median and 87.5 percent confidence band values, highlights the importance of understanding the entire distribution of future outcomes. A downward slide in commodity prices could lead to substantial shifts in program costs, while an increase would make payments unlikely. This result has important implications for projecting the support levels in the distant future, for which outcomes are less certain. Due to this expanding the confidence interval over time and program rules, average expected costs will increase simply because the payment distribution is skewed.

Although these results provide estimates of where commodity income support could head in the future, the exact values will depend on where commodity prices end up and how quickly producers change their election with price movements. If producers can accurately forecast future-marketing-year average prices, they stand to gain more support by choosing the higher paying income support program. The variability of the market and the expected price will also influence their decision because—if prices are significantly above or below the effective reference price—the higher paying election decision will be more certain. Thus, trends in prices (up or down) and the markets’ variability or stability will influence future program support levels.