Finding: Food Security in the U.S.

Food pantries distribute unprepared foods for home preparation. These emergency food providers are locally based and rely heavily on volunteers. Many are affiliated with faith-based organizations. Some food pantries are large stand-alone organizations, while some are smaller and located within churches or other community organizations. Most of the food distributed by food pantries comes from local resources and donations, but USDA supplements these resources through The Emergency Food Assistance Program (TEFAP). In fiscal 2017, TEFAP supplied 709.4 million pounds of commodities to community emergency food providers (including both food pantries and emergency soup kitchens).

In 2001, 2.8 percent of U.S. households reported obtaining food from a food pantry. By 2014, the rate had nearly doubled to 5.5 percent of households. This increasing use of food pantries coincided with an increase in food insecurity associated with the 2007-09 Great Recession. Food-insecure households are those that had difficulty at some time during the year providing enough food for all their members due to a lack of resources. Food-insecure households may turn to food pantries to cope with and alleviate food insecurity.

This increase in food pantry use is likely due to greater need, as the national prevalence of food insecurity was higher in 2017 (11.8 percent) than it was in 2001 (10.7 percent). The prevalence of food insecurity peaked at 14.9 percent in 2011. In addition to more need, the greater use of food pantries over time may also be due to greater availability of food pantries providing emergency food. Survey data collected by Feeding America—the national nonprofit organization that supplies food to the vast majority of U.S. emergency feeding programs—show the number of food pantries it served increased by 19 percent between 2002 and 2017. 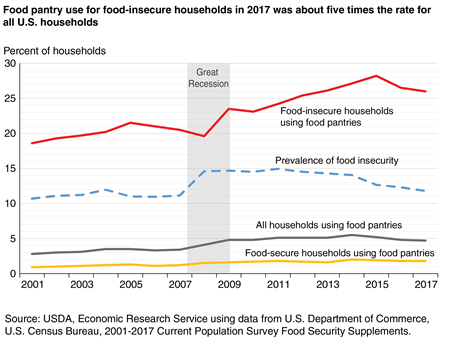