Impacts of the Value-Added Producer Grant Program on Business Outcomes

by Anil Rupasingha and John Pender

Access to readily available financial capital is a key to success for small businesses. USDA’s Rural Business-Cooperative Service (RBS) administers several grant and loan programs to support businesses in rural areas. The Value-Added Producer Grant (VAPG) program provides grants to help farmers and ranchers add greater value for agricultural commodities, such as through additional processing or marketing of new products. Some examples of adding greater value may include processing berries into jam, meat into sausage, wheat into flour, and corn into ethanol, as well as organic production. With these grants, the VAPG program aims to generate new products, initiate and expand marketing opportunities, increase producer earnings, create new jobs, and contribute to community economic development.

The number of grants and the amount of grant money obligated under the VAPG program have fluctuated substantially since the program began in 2001. Between 2001 and 2015, the program provided a total of 2,345 grants to farmers and ranchers—a total value of $318 million, or about $136,000 per grant on average. 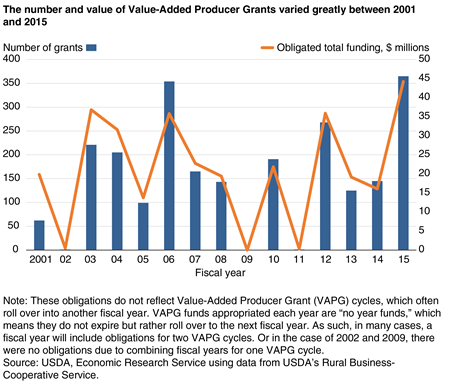 The map below displays county-level variation in the dollar amount distribution of VAPGs during 2001-15.  These grants are concentrated mainly in the north central, western, and northeastern regions of the United States. The north-central States of Iowa, Wisconsin, Missouri, Nebraska, and Minnesota received a combined 28 percent of all grants from 2001 to 2015. To understand the effects of the VAPG program on recipient businesses, ERS researchers conducted a study comparing the survival and employment growth of businesses that received VAPGs with the survival and growth of similar businesses that never received VAPGs (a comparison group). The study controlled for factors including location, industry, business age, and employment size—and considered the period from 2001 (beginning of the program) to 2013 (the latest establishment data available). Because business size in terms of the number of employees was needed to identify the comparison groups, the analysis excluded businesses with no employment history (i.e., startups). On average, VAPG recipient and nonrecipient businesses had about 14 employees and were about 7 years old at the time of receiving a VAPG.

Businesses That Received VAPGs Were Less Likely To Fail 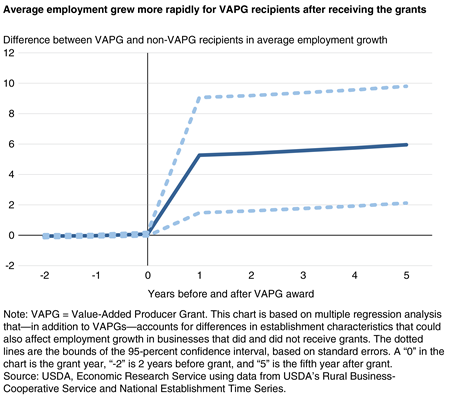 In a separate analysis, ERS researchers examined the implications of the size of a grant, rather than simply whether an establishment received a grant or not. They found that the risk of failing decreased significantly with increasing grant size. For example, increasing the average size of a grant from the current amount of $136,000 to $236,000 (a $100,000 increase) for a business is associated with a 47-percent decrease in the likelihood of failure for a recipient business 2 years after the grant. The results also showed that larger grants had greater employment impacts: an increase of the average size of a grant by $100,000 increases employment on average by about four jobs for recipients over the 2- to 4-year periods considered after the grants.

Given that a $100,000 increase in VAPG funding increases employment by about four jobs and assuming that the cost of the program includes only VAPG grants, the cost of the VAPG program to the taxpayer is around $25,000 per job created. Although not grant programs, the cost of Federal guaranteed loan programs per job may provide some interesting comparisons. Based on a recent study of the impact of Small Business Administration (SBA) loans on employment growth, rough calculations of the cost to taxpayers per created job for SBA loans ranged from $21,580 to $25,450, similar to that estimated as cost per job for VAPG grants.

USDA’s Value-Added Producer Grant Program and Its Effect on Business Survival and Growth, by Anil Rupasingha, John Pender, and Seth Wiggins, ERS, May 2018