Monthly Timing of SNAP Spending Less Smooth for Some Households

by Christian A. Gregory

In a typical month in fiscal 2017, USDA’s Supplemental Nutrition Assistance Program (SNAP) provided 42.1 million low-income Americans with benefits averaging $126 per person. SNAP households receive their benefits once a month and use them to purchase food from grocery stores and other retailers. Evidence suggests that a large share of SNAP benefits are redeemed in the first few days after receipt. This concentrated spending may allow SNAP households to stock up on nonperishables or buy in bulk at the beginning of the month, but it may also mean they are left with fewer financial resources at month’s end. Research shows that the average SNAP household consumes less food and has poorer diet quality at the end of the benefit month than at the beginning.

A team of researchers from the University of Georgia and ERS used data from USDA’s 2012-13 National Household Food Acquisition and Purchase Survey (FoodAPS) to examine the severity of this uneven monthly SNAP spending pattern and how common it is. They looked at the food spending habits of SNAP households in the first 4 days after they had received SNAP benefits. The researchers controlled for a host of factors that one might expect to influence the timing of spending patterns: household size, cash income, attitudes toward healthy foods, knowledge of nutrition, and many other characteristics. 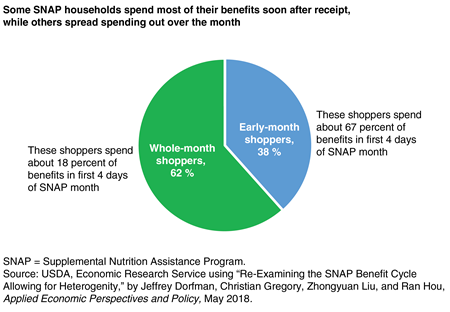