The Federal Government operates a variety of programs that help crop producers manage risk due to unexpected changes in market prices and yields. These programs include Agriculture Risk Coverage-County (ARC-CO) and Price Loss Coverage (PLC), both introduced in the 2014 Farm Act. Like traditional Federal crop insurance programs, ARC-CO and PLC reduce the downside revenue risk facing producers of corn, soybeans, wheat, and other covered commodities. However, unlike crop insurance, the two programs do not require producers to pay premiums. Differences in the two programs’ payment formulas can also drive coverage selections for individual crops. ARC-CO and PLC program payments are made on historical base acres and yields, not on currently produced commodities, and required a one-time enrollment choice in 2014. While the payments can reduce income risk, they do not protect against a producer’s individual crop yield and revenue risk like traditional Federal crop insurance.

Known as a “shallow loss” program, ARC-CO makes payments to producers when a county’s revenues in a covered commodity fall below 86 percent of guaranteed revenues, based on the recent history of county yields and national prices. With each passing year, ARC’s price formula updates with new price information. For example, if prices go down, payments made to producers can fall. In contrast to ARC-CO, PLC payments do not account for yields. And rather than rely on recent price behavior, PLC payments trigger when market prices simply fall below a reference price that lasts the life of the Farm Act.

These formula differences along with beliefs about future prices likely informed farmers’ expectations of payment levels between the two programs, which may explain the varying program enrollment rates across crops. For example, higher corn and soybean prices around the time of the 2014 Farm Act likely led producers to enroll the vast majority of U.S. corn and soybean acres in ARC-CO. Meanwhile, higher reference prices for rice and peanuts offered producers an incentive to enroll nearly all U.S. acreage of these crops in PLC. For other crops, the two programs’ formulas yielded smaller price differences, and enrollment outcomes were more mixed. Wheat producers split their acres roughly evenly between the two programs. About two-thirds of sorghum and three-quarters of barley acres went to PLC, while about two-thirds of oats acres went to ARC-CO.

Understanding the link between program enrollment decisions and commodity prices can help explain differences in ARC-CO and PLC participation rates across commodities and over time, particularly as crop prices continue to change. 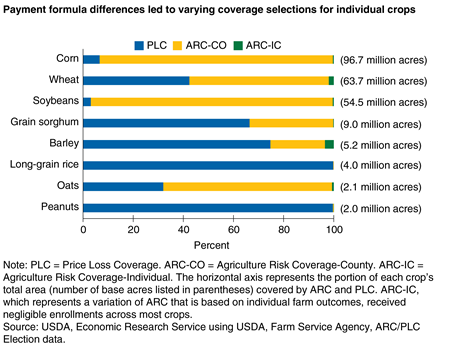