Crop insurance can help protect farmers from large losses resulting from crop failure or unusually large drops in crop prices. In some ways, crop insurance acts like home or car insurance: Farmers pay a premium and receive a payment that covers any loss (minus a deductible). While farmers buy crop insurance from private companies, USDA sets the premium rates and subsidizes them.

On average, U.S. farmers pay only about 40 percent of crop insurance premiums. Subsidized crop insurance makes crop production less risky and more profitable. As a result, farmers may increase their total crop production. They may also change the mix of crops that they grow. For example, crop insurance could prompt farmers to shift land from pasture to annual crops (like corn) or grow corn rather than wheat on some land.

Recent ERS research suggests that crop insurance has small effects on environmental quality in the Corn Belt region (Illinois, Indiana, Iowa, Missouri, and Ohio). The research estimated that cropland acreage was 0.06 percent larger with than without crop insurance in 2010. The effect on crop mix was larger, but still modest. Crop insurance increased corn acreage by an estimated 1.7 percent, shifting land away from crops like wheat, hay, and soybeans. These estimated changes in land use and crop mix caused small (about a third of a percent) estimated increases in overall soil erosion, nitrogen loss to groundwater, and the loss of soil organic carbon. Estimated nitrogen loss to surface water was unchanged. 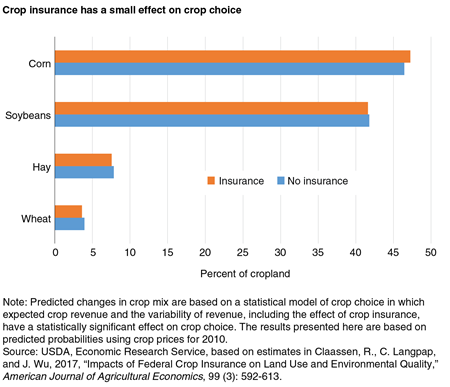