Because dietary trans fats raise levels of LDL cholesterol (the artery-clogging “bad” cholesterol), many studies have observed an association between increased intake of trans fats and an elevated risk of cardiovascular disease. To reduce that risk, USDA and the U.S. Department of Health and Human Services included a recommendation in their 2005 Dietary Guidelines for Americans that Americans limit their intake of trans fats. In addition, since 2006, food manufacturers have been required by the Federal Government to declare the trans fat content of foods on the Nutrition Facts labels of packaged food products. In a 2012 report, ERS researchers found evidence that food manufacturers responded to these two policy decisions by reformulating many of their food products to eliminate or reduce trans-fat contents over the 2005-10 period.

Did dietary advice and food product reformulations result in a decrease in dietary intake of trans fats? A recent ERS study found American adults, on average, substantially reduced their intake of trans fats between 1999 and 2010. The study used data on blood plasma levels of trans fats of American adults ages 20 and older from the 1999-2000 and 2009-2010 waves of the National Health and Nutrition Examination Survey, a nationally representative survey that assesses the health and nutritional status of Americans. The sum of four different types of trans fat were considered in the analysis, and two types were considered in isolation: one that is commonly found in partially hydrogenated oils—the principal source of artificial or industrially produced trans fat in the food supply—and another that is naturally occurring in ruminant animals and present in small quantities in dairy products. 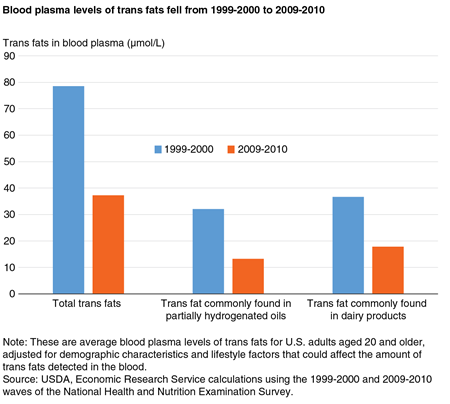