Declines in Pollinator Forage Suitability Were Concentrated in the Midwest, the Over-Summering Grounds for Many Honeybees

While most agricultural commodities are wind-pollinated, about one-third of total U.S. food consumption—including most fruits, nuts, and vegetables—either require or benefit from insect pollination. Both honeybees and wild pollinators (such as wasps and butterflies) offer pollination services to agricultural production. Managed honeybees alone provide over $350 million worth of such services each year.

Recently, however, the health of pollinators has suffered. Honeybee mortality, as measured by the annual loss of colonies, increased from 36 percent of colonies in 2010-11 to 44 percent in 2015-16—a 22-percent increase over the 5-year period. Pollinators like bees depend on the land to provide forage, the pollen and nectar of flowering plants they feed on to survive. If forage is inadequate, pollinator health may be poor. Other stressors can affect pollinator health as well, including pests, pesticide exposure, and long-distance travel.

The quality and quantity of forage available to pollinators depends on land use and land cover. To examine how broad land-use changes have affected the availability of forage for pollinators, ERS developed a forage suitability index (FSI) using 30 years of data (representing 1.4 billion acres) from USDA’s National Resources Inventory (NRI). This index is based on expert opinions of the forage quality for pollinators provided by different land uses and land covers. While the FSI cannot make definitive statements because it does not account for factors such as changes in pesticide use and weed management, it can illustrate broad trends in land use as it relates to pollinator forage land.

Findings show the national average FSI increased by about 2 percent from 1982 to 2002. This improvement in forage suitability is due, in part, to the introduction of USDA’s Conservation Reserve Program (CRP) in 1986. Farmers enrolled in CRP receive yearly rental payments in exchange for voluntarily removing environmentally sensitive land from agricultural production. The mix of species farmers agree to plant on CRP land often improves pollinator forage. However, after increasing in the prior decade, the national average FSI plateaued between 2002 and 2012 (the most recent year for which NRI data are available).

The national results mask regional variation in declining forage quality. Although unchanged in most of the Nation between 2002 and 2012, the FSI had a greater-than-average decline in North Dakota and South Dakota—the summer foraging grounds for many managed honeybee colonies. Decreases in CRP acreage and increases in soybean acreage, which provide poor forage for pollinators, drove this decline. 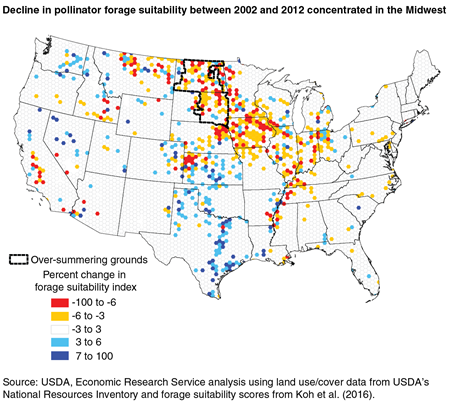