by Ashley Hungerford and Gregory Astill

USDA operates a number of Federal crop insurance and disaster aid programs to mitigate the downside risks inherent to agricultural production (e.g., damaging weather, price, or yield shocks). However, crop insurance underwritten by the USDA Risk Management Agency is only available to certain commodities in specified areas. Producers have been able to enroll in the Noninsured Crop Disaster Assistance Program (NAP), which is managed by the USDA Farm Service Agency, since 1994. This program insures producers in situations when Federal crop insurance is unavailable to them due to their crop or location.

Applications for NAP increased from 66,000 to 138,000 between 2014 to 2015, and the number of producers who enrolled and qualified for a service fee waiver increased from 8,000 to over 16,000. In 2015, the first year NAP Buy-Up was offered, 16 percent of policies purchased buy-up coverage. Excluding grasses and other forage crops for grazing, most of which do not qualify for NAP Buy-Up, 28 percent of policies purchased buy-up coverage.

Overall, recent changes to NAP appear to be the motivation for expanded enrollment in the program and resulted in thousands of specialty crop producers who purchased NAP Buy-Up for their crops. 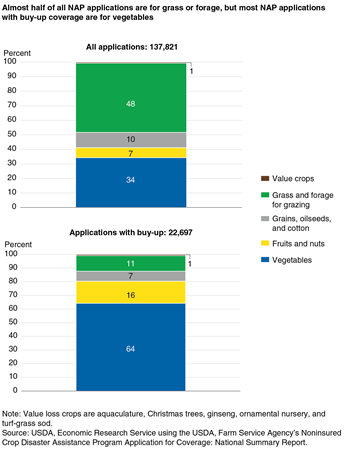 Changes to the Noninsured Crop Disaster Assistance Program Under the Agricultural Act of 2014: Their Potential Risk Reduction Impacts, by Ashley Hungerford, Gregory Astill, and Anne Effland, ERS, May 2017