by James Williamson and John Pender

The 2005 Atlantic hurricane season was one of the costliest and deadliest in U.S. history. Three hurricanes—Katrina, Rita, and Wilma—together were responsible for over 2,000 deaths and more than $150 billion worth of damage, much of it uninsured. In the wake of the disasters, the U.S. Congress quickly enacted two pieces of tax relief legislation: the Katrina Emergency Tax Relief Act of 2005 and the Gulf Opportunity Zone Act (GO Zone Act) of 2005. These laws provided tax benefits to individuals to help replace lost income and mitigate uninsured losses. Employment-related provisions were also created, such as an employee retention credit available to employers affected by the hurricanes. Provisions were targeted to a region defined as the GO Zone covering 90 counties in Alabama, Louisiana, and Mississippi, including 50 rural counties.

Using the boundaries of the GO Zone and storm damage estimates generated by the Federal Emergency Management Agency (FEMA), ERS researchers examined changes in economic indicators for counties within the GO Zone (treatment group) and for a control group of like-damaged counties—as measured by a storm damage loss ratio calculated by FEMA—outside of the GO Zone in the same or nearby States that were otherwise similar in socioeconomic and demographic characteristics. Sixty-three percent of the matched counties were rural counties.

Researchers used data from the U.S. Department of Commerce’s Bureau of Economic Analysis to examine changes in per capita income and its major components (net earnings, property income—interest, rents, and dividends—and transfer payments, such as social security benefits), employment per capita, and population from 2004, the year prior to Hurricane Katrina, to 2011 in the two county groups. They used statistical techniques to estimate the effect of the GO Zone policies on the rates of change in these outcomes.

Holding other factors constant, such as assistance from traditional disaster relief programs, findings show significant differences in income and employment growth between counties that suffered relatively small losses from Hurricane Katrina in the GO Zone and similar counties outside of that zone. Per capita personal income grew 5 to 6 percent ($1,000-$1,200) more in the matched GO Zone counties than in the matched control counties during 2004-08. Net earnings (sum of all wages and salaries earned, after deductions have been taken) and property income appear to account for the differences in the rates of growth. This evidence suggests that the GO Zone legislation helped the GO Zone counties “catch up” with non-GO Zone counties. The analysis did not consider alternative hypotheses for these results, such as the effects of State-specific policies or contexts, or the effects of the county matching method. Furthermore, the results were found to be robust after accounting for spillover effects from counties bordering the GO Zone, differences in Federal funds received, and selective migration into and out of the GO Zone. 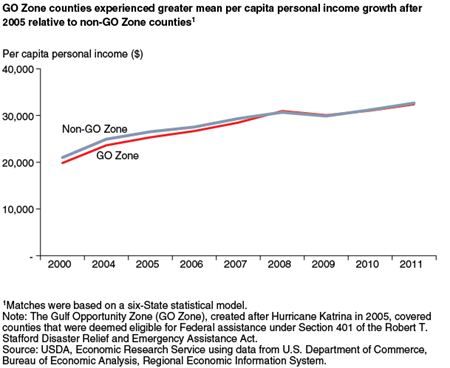