On an average day in 2014, Americans age 18 and over spent 37 minutes in food preparation and cleanup. However, the average time spent in “meal prep”—preparing food and beverages, serving the food, and cleaning up afterwards—varied considerably among different groups. Men spent an average of 22 minutes, whereas women spent 51 minutes. Younger adults (age 18-24) spent 21 minutes, whereas working-age adults (age 25-64) spent 38 minutes, and those age 65 or older spent 43 minutes. Employed individuals spent less time in meal prep than those not employed, and those in households without children spent less time than those in households with children.

The data used in these findings are from the 2014 Eating & Health Module (EHM)—a supplement to the Bureau of Labor Statistics’ American Time Use Survey (ATUS). The ATUS includes a 24-hour time diary and questions on labor force participation and demographic information. The ERS-developed EHM includes additional questions on eating patterns, Body Mass Index (BMI), food safety practices, grocery shopping, and meal preparation. Estimates provided here have been weighted to be nationally representative.

Among the EHM questions are inquiries about whether the survey respondent’s household participated in the USDA food and nutrition assistance programs the Supplemental Nutrition Assistance Program (SNAP) and the Special Supplemental Nutrition Program for Women, Infants, and Children (WIC). Individuals participating in SNAP spent 50 minutes in meal prep on an average day in 2014. SNAP benefits cannot be used for hot, prepared foods, and so participants’ groceries are more likely to be “scratch” ingredients that take longer to prepare.

The WIC program serves pregnant, breastfeeding, and postpartum low-income woman as well as infants and children up to age 5. WIC participants’ relatively long average meal prep time of 62 minutes per day reflects the fact that meal prep time, as classified by the American Time Use Survey, includes preparing baby food and baby formula, as well as breastfeeding and pumping breast milk. 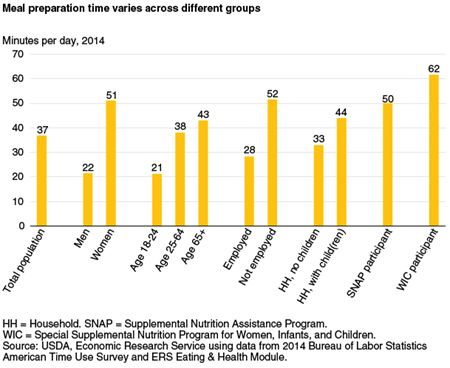 One of the EHM questions is “Are you the person who usually prepares the meals in your household?” Respondents can answer: yes, no, or split equally. About three-quarters of women responded that they are the usual meal preparers in their households. A larger share of men (15 percent) than women (10 percent) responded that they split the task equally with other members of their household. 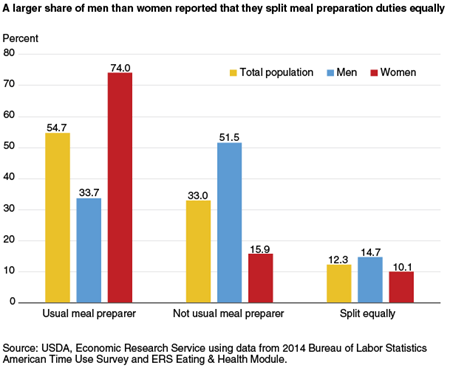 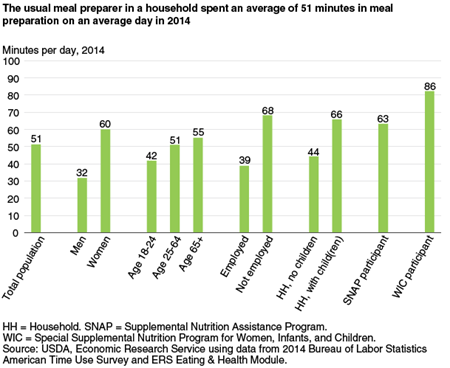 For all groups, those who purchased fast food on the time diary day spent less time in meal prep than those who did not purchase fast food. The time savings of fast food was more pronounced for those who were employed (45 versus 21 minutes) and those in households with children (74 versus 39 minutes). For these usual meal preparers, meal prep time when fast food was purchased was about half the time spent by the usual meal preparers in similar households that did not purchase fast food. 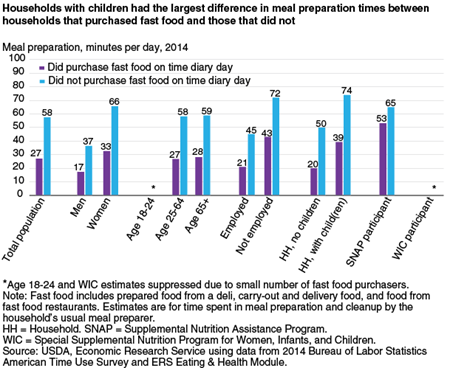 On average, a household’s usual meal preparer saves about 30 minutes of meal preparation time a day by purchasing prepared food. Over the course of the year, this is the equivalent of 7.7 days not spent in meal preparation, a considerable time savings for outsourcing meal production. However, this time savings does not include any travel time to purchase fast food. And time is not the only factor to consider. The cost and the nutritional value of meals prepared at home versus outsourced meals prepared by grocery store deli departments or away-from-home eating places are other considerations, along with the satisfaction that some individuals derive from either food preparation or eating out.