As part of its oversight of the safety of U.S. food products, the U.S. Food and Drug Administration (FDA) inspects imported foods at the border or port of entry for evidence of adulteration or misbranding. FDA has limited resources, and physically inspects about 1 percent of the approximately 60 million tons of food under its regulatory authority imported into the United States each year—products ranging from Spanish clementines to ground pepper and rice from India. FDA inspectors target certain firms and types of products that are prone to greater risks. When an inspector identifies an adulteration or misbranding violation, the shipment is subject to refusal into the United States.

ERS researchers analyzed the records of FDA refusals over 2005-13 to assess patterns in import refusals by product category, violation type, and exporting country and compared results with an earlier study analyzing similar data over 1998-2004. In both time periods, the top three products in terms of refusals were fishery/seafood products, vegetables/vegetable products, and fruit/fruit products. The countries with the most food shipments refused by FDA—Mexico, India, and China—have distinct sets of product categories that reflect the quantities and types of products they export to the United States.

FDA does not have the resources to examine every shipment of food entering the United States. Thus, FDA inspectors must prioritize and target certain exporting countries, producers, importers, commodities, or products it expects to pose greater risk to human health or to more likely be in violation of U.S. regulations. FDA uses a set of risk-based criteria to determine which shipments should be inspected. The nonrandom nature of FDA sampling means that researchers cannot draw inferences about the relative safety of food produced in various countries or the relative risk of certain food products. Instead, FDA import refusals reveal recurring patterns of import violations in food products that have repeatedly attracted the attention of FDA inspectors.

All imports refused by FDA are reported in FDA’s Operational and Administrative System for Import Support (OASIS) database. In the OASIS database, each violation is listed with a charge statement and shorthand code. Many of these charge statements explicitly list adulteration or misbranding. Foods that have been adulterated or misbranded are specifically prohibited in interstate commerce by the Federal Food, Drug, & Cosmetic Act. The Act defines an adulterated food as one that contains, for example, poisonous ingredients, disease-causing bacteria and viruses (pathogens), unsafe color additives, pesticide residues, or apparent filth.

Food is typically considered misbranded if it bears a false or misleading label with regard to ingredients, origin/manufacturer, or quality of ingredients. Many foods refused because of misbranding violations pose no imminent threat to public health, but others, like violations for undeclared allergens, do. Some violations may be economically motivated, as when producers substitute cheaper ingredients in a product and fail to label this substitution on the package. For example, producers may add maltodextrin (an inexpensive food additive made from starch) to honey. Though safe to consume, the presence of maltodextrin—if not labeled accurately—would be grounds for refusal.

Seafood and Vegetables Top the List of Import Refusals 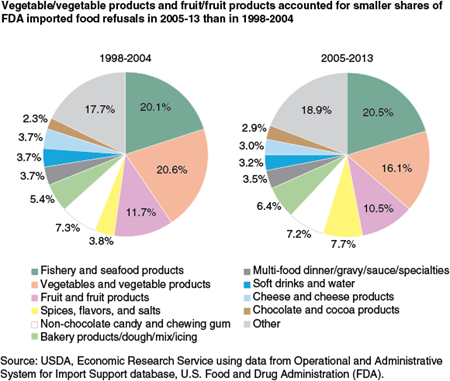 Nearly Three in Five Food Import Refusals Are Due to Adulteration For other products, adulteration was the primary violation, in one of three forms: (1) pathogen or toxin, (2) chemical (pesticide residues, drug residues, or unsafe additives), and (3) other (including filthy or decomposed appearance and failure to register processes for canned food products). “Other” adulteration violations accounted for 50.4 percent of adulteration violations over 2005 to 2013; chemical contamination, 32.8 percent; and pathogen/toxin violations, 16.9 percent.

The most frequent violation in 2005-13, by far, in the pathogen/toxin adulteration category was for the presence of Salmonella, a genus of bacteria that can cause typhoid fever and other digestive illnesses. Salmonella violations accounted for 83.7 percent of pathogen/toxin adulteration violations, up from 63.0 percent in 1998-2004. The most Salmonella violations were in fishery and seafood products (42.0 percent of total), followed by spices, flavors, and salts (33.2 percent). Spices, flavors, and salts accounted for 29.6 percent of the violations for products shipped from India in 2005-13, followed by whole grain/milled grain products/starch (11.9 percent) and bakery products/dough/mix/icing (10.8 percent). Pesticide residues in whole grains/milled grain products/starches became a major problem in exports from India in 2012 and 2013 after years without any significant detected problems, likely due to increased detection efforts targeting that problem. Violations in spices, flavors, and salts were especially high from 2010 to 2012.

Among food imports from China, fishery/seafood product shipments led with 32.3 percent of shipments in violation, followed by vegetables/vegetable products (20.9 percent) and fruit/fruit products (10.9 percent). Over 2005-13, refused fishery/seafood product shipments from China—mostly due to veterinary drug residues—peaked in 2007. The most violations in both Chinese vegetables/vegetable products and bakery products/dough/mix/icing imports occurred in 2013.

ERS research shows that problems with adulterated and misbranded food imports persist, despite FDA’s deterrence and detection efforts. Fishery/seafood products, vegetables/vegetable products, and fruit/fruit products were the industries with the most shipments refused in 2005-13 and also in 1998-2004. The safety of imported seafood clearly continues to be of significant concern. Spices, flavors, and salts were refused more often in 2005-13 than in 1998-2004, and pathogen and toxin adulteration was responsible for more violations in the latter period.

The same problems, year after year, in food import shipments suggest that FDA’s inspection regime may not have sufficiently deterred producers and importers from offering food shipments that violate U.S. regulations. At the same time, country-related patterns do not necessarily indicate increased problems with the safety of food products from particular countries. Violations and shipments refused by FDA reflect the outcome of a complex system that depends on import volumes and FDA’s expectations about the safety of the products offered for import.

As the total volume of imported food has risen, the number of shipments refused has declined relative to the volume of food imports. This relative decline may reflect improvements in compliance with U.S. laws among foreign producers and importers, or it may reflect FDA’s limited resources and capacity to inspect, detain, and refuse imported food. Because FDA inspections of imports are not conducted randomly, but are risk-based and designed as deterrents, additional data on the value and volume of shipments (as a share of total shipments) for various groups of producers would be needed for a careful analysis of the risks presented by specific products and producing countries.