Since the late 2000s, India has rapidly increased its beef exports—specifically water buffalo meat, also known as carabeef—narrowly overtaking Brazil as the world’s largest beef exporter in 2014. Recent ERS research shows that India’s beef exports grew from an average of 0.31 million tons during 1999-2001 to an estimated 2.1 million tons during 2013-15, or about 12 percent annually. Over the same period, India increased its share of world beef exports from just 5 percent to about 21 percent. Although the U.S. share of global beef exports declined from 18 percent to 11 percent during this period, the decline does not appear to stem from increased competition from India, as Indian beef suppliers serve distinctly different market segments from those targeted by U.S. exporters.

The rapid expansion in India’s beef exports has been driven by three main factors. First, global demand for India’s relatively low-cost water buffalo meat is strong, particularly among low- and middle-income countries in Asia and the Middle East. The United States and most other developed-country beef exporters primarily supply higher cost beef products that target higher income markets and consumers. The relatively low price of Indian beef reflects perceived quality differences: it is buffalo rather than cattle meat, it is produced primarily from culled dairy animals, and it cannot meet the stricter sanitary and phytosanitary standards common in more advanced markets.

Second is the size of India’s water buffalo herd which is, by far, the world’s largest. The herd is prized for dairy production but is mostly underexploited for meat production because of low domestic consumer preference for beef by a majority of Indian consumers. Third, the development of private, export-oriented slaughter and packing firms in several Indian States is enabling the successful transport and processing of animals and marketing of products to the specifications of a diverse set of export markets. While exports of cattle beef are banned for religious reasons, buffalo do not hold the same religious significance to most Indians, and buffalo slaughter is legal throughout India.

Analysis of India’s capacity to sustain growth in buffalo meat exports is limited by a lack of reliable data. USDA projections suggest continued strong growth in import demand in most of the markets served by Indian beef suppliers, but assumptions based on past calf-rearing and feeding practices suggest that Indian production could fall below current USDA projections by about 2020. If producers or processors respond to the commercial opportunity now afforded by the export market by rearing more male buffalo calves and/or increasing feeding to boost low slaughter weights, production and export growth may be sustained. 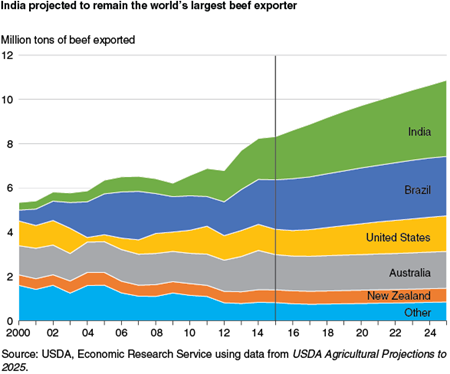