by Alana Rhone and Laura Tiehen

In fiscal 2015, 8 million women, infants, and children under age 5 participated in USDA’s Special Supplemental Nutrition Program for Women, Infants, and Children (WIC). Participants in 48 States and the District of Columbia received paper vouchers or electronic benefit cards redeemable at authorized retail stores for a set of nutrient-rich supplemental foods. WIC participants in Mississippi pick up their WIC foods at distribution centers, and prior to 2016, Vermont participants had their WIC foods delivered to their homes. Stores are reimbursed for the retail price of the foods purchased with WIC benefits, subject to State maximum reimbursement levels. If WIC benefits are redeemed at stores with higher prices, program costs would increase.

Using two USDA administrative data sources, a recent ERS report found that over three-fourths of WIC benefits that were redeemed in stores in fiscal 2012 were redeemed at large stores (supercenters, supermarkets, and large grocery stores), ranging from 50 percent in California to 99 percent in Nevada. Large stores accounted for 81 percent or more of WIC retail redemptions in 30 States. The high share of WIC redemptions at large stores likely reflects the high share (63 percent) of large stores that were WIC-authorized retail vendors in 2012. Also, according to the National Survey of WIC Participants-II, 84 percent of participants reported redeeming their WIC benefits at the same stores where they do their usual food shopping.

WIC benefits are also redeemed at other retail outlets, such as medium and small grocery stores, WIC-only stores, and A50 stores (those that derive more than 50 percent of their annual food sales revenue from WIC redemptions). These other types of stores accounted for considerable shares of redemptions in some States. For example, medium and small grocery stores accounted for 30 percent of WIC retail redemptions in New York in fiscal 2012, and WIC-only and A50 stores accounted for 37 percent of retail redemptions in California. WIC-only and A50 stores are restricted by law to redeem WIC benefits at a price no higher than the average retail price for WIC foods at all other WIC-authorized stores in the State and thus combine the convenience of a small WIC-focused store with lower prices closer to those of a large store.

Variation in WIC retail redemptions across store types may reflect the mix of stores available to WIC participants and State policies regarding WIC-vendor authorization. States may consider participant access as well as food prices when choosing which retail stores to authorize. Increasing participant access in areas that do not have large stores may help explain why New York, for example, chooses to authorize a relatively higher percent of medium and smaller stores than other States. 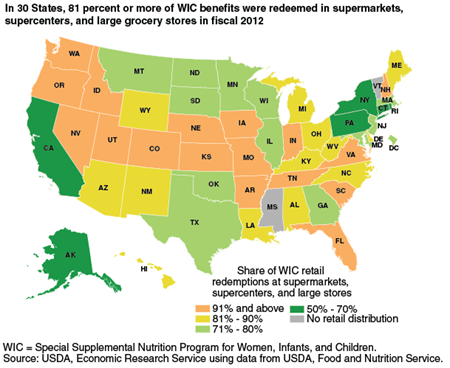