by Getachew Nigatu and Ralph Seeley

The various regions of the DEE are the main sources of projected growth for meat and feed demand, leading to projected increases in global trade for these commodities. Important factors for such growth are increasing incomes and urbanization along with an expanding middle class, implying that a greater percentage of the population can afford to consume meat and gain access to meat markets. These factors can change consumption patterns and preferences away from traditional food sources and staples toward greater diet diversification and higher quality protein from meat.

Given that two-thirds of the world’s population lives in the DEE, with its relatively faster population and income growth, potential opportunities to increase exports exist for major meat and feed producing countries such as the United States. 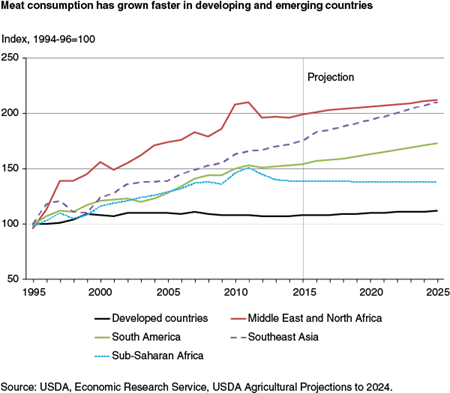