Consumer demand for year-round supply, a growing diversity of tomato types/substitutes, and developing technologies have all influenced U.S. fresh-tomato markets. Fresh tomatoes are grown under two distinct production systems: in open fields or under cover in some type of protected-culture system. Protected culture can vary from lower technology shade houses that cover crops planted in fields to higher technology, active-environmental-control greenhouses using hydroponics. Almost all fresh-market tomatoes consumed in the United States are produced domestically or imported from Mexico and Canada. Field and protected-culture producers in the three countries provide a seamless supply of tomatoes to the market. Multiple production regions in the market every month limits periods of short supply and peak prices.

The growing importance of protected-culture tomatoes is evidenced by the shrinking role of round field tomatoes, whether classified as either mature green or vine ripe; these types of tomatoes once dominated the U.S. tomato supply. California and Florida primarily grow mature green tomatoes, and Mexico grows vine ripe tomatoes, but production of round field tomatoes has declined in all three regions. Food service and retail buyers both traditionally purchased mature greens, but the retail market for this product has declined sharply. In calendar year 2011, protected-culture tomatoes made up 40 percent of the U.S. tomato supply, up from less than 10 percent in 2004; they now dominate the retail industry and are becoming more common in food service. The transition to protected-culture tomatoes is likely to accelerate if growers can meet foodservice demand, particularly from fast food buyers. 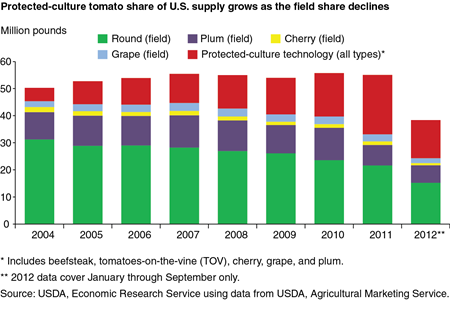