Since the 1960s, global agricultural output has increased at an average annual rate of between 2 and 3 percent (in volume terms, holding prices constant). The figure below decomposes global agricultural growth (measured by the height of the bars, in average annual percent growth) into growth due to expanding the use of resources and to raising total factor productivity (TFP). The figure shows that output growth was high in the 1960s, slowed in the 1970s and 1980s, accelerated in the 1990s and 2000s, but slowed again in the most recent decade (2011-19). In this latest period (2011-19), global output of total crop, animal, and aquaculture commodities grew by an average rate of 2.08 percent per year. 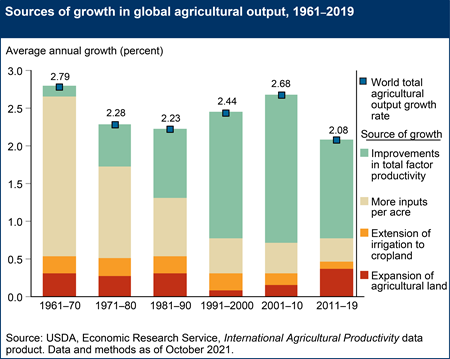 The different colors of the bars show how much of total output growth came from bringing new resources into production, including expansion of agricultural land, extension of irrigation to existing cropland (a form of land augmentation), and the intensification of input use (more labor, capital, and material inputs per acre), and how much came about by raising the TFP of these resources.

In the decades prior to 1990, most output growth came about from intensifying input use. Bringing new land into agriculture production and extending irrigation to existing agricultural land were also important sources of growth. Since the 1990s, growth in TFP rather than factor accumulation (growth in land, irrigation, and other inputs) accounted for most of the growth in world agriculture output. In the most recent period (2011-19), TFP grew an annual rate of 1.31 percent, accounting for nearly two-thirds of the growth in agricultural output. 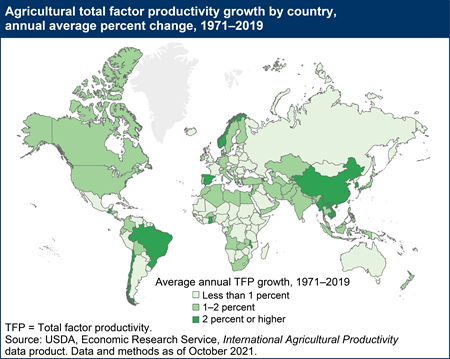 National policies and institutions—especially those that promote innovation and technical change—play a major role in driving TFP growth in agriculture. Strengthening the capacity of national agricultural research and extension systems to develop and deliver new agricultural technologies to farmers has been key to raising agricultural productivity (Fuglie, 2018; Evenson and Fuglie, 2010). Long-term investments in agricultural research were especially important to sustaining higher agricultural TFP growth rates in large, rapidly developing countries such as Brazil (Rada and Valdes, 2012) and India (Rada and Schimmelpfennig, 2015). Chinese agriculture benefited enormously from institutional and economic reforms as well as technological changes resulting from investments in research (Fan, 1991; Lin, 1992; Jin et al., 2002). Russian agriculture underwent a significant contraction in the 1990s when it made a transition from a planned to a market economy. It rebounded after 2000, and the southern region of the country achieved substantial productivity improvement while other regions have continued to lag (Rada et al., 2017). Under-investment in agricultural research and extension as well as poor market infrastructure remain important barriers to stimulating agricultural productivity growth in Sub-Saharan Africa (Fuglie and Rada, 2013).