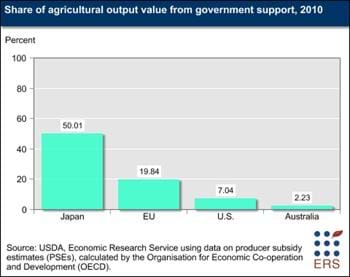 Agriculture in Japan is heavily protected by trade barriers and domestic subsidies. Producer support estimates (PSEs), calculated by the Organisation for Economic Co-operation and Development (OECD), show that about 50 percent of the value of Japan's farm production comes from government support. In comparison, U.S. government support of agricultural products accounts for about 7 percent of production value. While high by world standards, the degree of protection varies widely across commodities in Japan. Some agricultural industries can compete with imports without heavy protection because they use labor-saving technologies or produce commodities having unique characteristics. However, much of Japan's agricultural production is inefficient compared to exporting countries and is sheltered behind very high trade barriers and subsidies. This chart is an update of one found in the Japan topic on the ERS website from June 2010.