During the pre-recession economic growth years, counties with a high percentage of their workforce employed in “creative” occupations—engineers, scientists, artists, and others tasked with combining knowledge and ideas in novel ways—tended to experience higher rates of local employment growth than other counties, but having a high share of creative jobs did not offer much local job market protection during the 2007-09 recession. “Creative class” counties—those in the top quartile of all counties ranked by their share of creative jobs—were more likely to experience employment losses in the recession than other counties. However, a higher share of creative class counties gained employment during the economic recovery. While a much higher percentage of metro counties have seen recent employment growth whether or not they are creative class counties, a higher share of nonmetro counties gained employment during both the recession and recovery, the latter group benefitting from employment gains driven mainly by the energy boom. This chart is derived from the October 2014 Amber Waves data feature, "What Happened to the "'Creative Class' Job Growth Engine" During the Recession and Recovery?" For many decades, most U.S. nonmetro counties experienced significant population loss among young adults, especially in the years immediately following high school graduation. Some of that population loss was offset by net gains among individuals in their late 20s and 30s. While this population pattern does not hold in amenity-rich areas with easy access to urban areas, it continues in remote, low-amenity nonmetro counties (identified based on urban accessibility measures and the ERS Natural Amenities Index). A large share of those moving into these remote areas during their late 20s and 30s are childhood residents returning with spouses and children to their home communities. This chart is found in the December 2012 issue of Amber Waves magazine.

A mixture of trees and open area is most appealing The attractiveness of an area as a place to live and work depends partly on how land is used. Landscape preferences research confirms that water and varied terrain are attractive features, but also shows that scenery with a mix of forest and open country is attractive to people, much more so than scenery that is either largely treeless or extensively forested. Rural migration patterns suggest that people have followed these preferences in choosing where to live. The population of the typical nonmetro county with between 60 and 70 percent of its land are covered by trees grew more than other nonmetro counties over the 1970-2010 period--increasing by nearly 50 percent. This chart is from the Natural Amenities topic page on the ERS website, updated May 26, 2012. 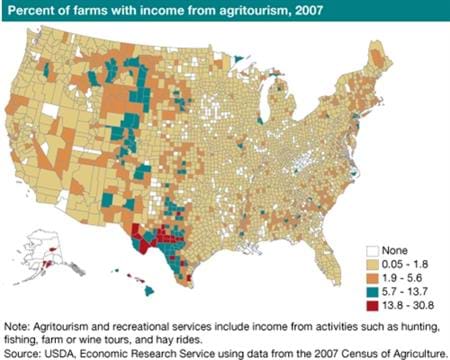 Agritourism includes such recreational services as hunting and fishing, farm or wine tours, and hay rides. The share of farms engaged in agritourism is high in the West, where agricultural lands tend to have lower yields due to low rainfall and mountainous terrain. Agritourism farms are also relatively common in sparsely populated parts of Texas, in a string of rural counties running from Louisiana to the Carolinas, and in some high-amenity locations benefiting from seasonal residents and tourism, such as in the New England area, and along the East coast and the Northern Great Lakes. This map appeared in the March 2011 issue of Amber Waves.