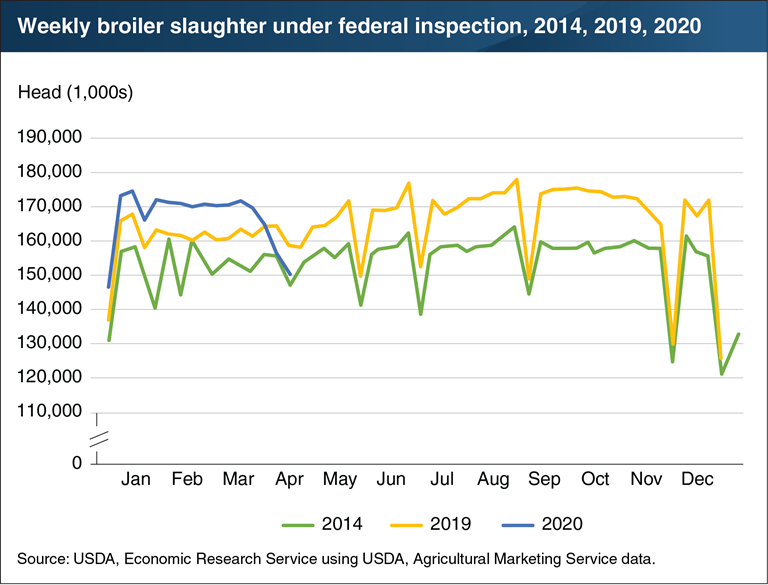 The outbreak of COVID-19 among workers in U.S. broiler processing facilities has slowed the processing volumes of broiler chicken meat, which had previously been running at a steadily high pace. Production of broiler meat in the United States in early 2020 reached a record-producing clip, significantly outperforming the same period in 2019. To support this level of production, processing rates (slaughter) had also reached an all-time high, with first-quarter 2020 volumes reaching an average of 169 million birds per week. With the spread of COVID-19, measures to increase social distancing on the production line, as well as plant closures and workforce absenteeism drove down broiler processing volumes to 155 million birds the week ending April 11 and 150 million the week ending April 18. These decreases of 8 percent and 11 percent, respectively, relative to first-quarter average volumes pushed April weekly processing volumes below levels not seen since 2014. The disruption to broiler supplies, however, was preceded by a significant shift in the demand structure for broiler meat wherein demand from food service declined sharply. While much of this demand transferred to the retail sector, it is unlikely that retail is completely making up for the lost food-service demand. Although prices of some cuts have increased from their recent lows as supplies have tightened, wholesale prices for nearly all broiler products since the beginning of April remain weak, suggesting overall broiler supplies continue to outpace demand. Some of this information is discussed in the Economic Research Service Livestock, Dairy, and Poultry Monthly Outlook for March and April 2020 and has been updated using data from the Agricultural Marketing Service.